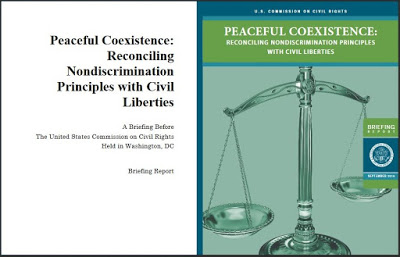 The U.S. Commission on Civil Rights recently released a report criticizing religious exemptions that infringe on civil rights â€• and some conservative voices are not happy about the final outcome.

The USCCR started examining how federal courts have handled claims of religious exemptions in 2013. Years later, and without resolving much of the disagreement within its leadership, the commission has put out a report that ultimately came down on the side of those who believe religious exemptions have the potential to â€œsignificantly infringeâ€ on a personâ€™s civil rights.

â€œReligious exemptions to the protections of civil rights based upon classifications such as race, color, national origin, sex, disability status, sexual orientation, and gender identity, when they are permissible, significantly infringe upon these civil rights,â€ the Sept. 7 report reads.

â€œReligious liberty was never intended to give one religion dominion over other religions, or a veto power over the civil rights and civil liberties of others,â€ Castro wrote in his statement. â€œHowever, today, as in the past, religion is being used as both a weapon and a shield by those seeking to deny others equality.â€

Religious exemptions have a long history in America. In the past, exemptions have protected members of minority faiths, allowing conscientious objectors to be exempt from drafts, for instance. Theyâ€™ve also prevented the government from getting too deeply entangled with the inner workings of religious institutions, exempting churches from anti-discrimination laws and allowing them decide what kinds of ministers to hire.

This content-post is archived for backup and to keep archived records of any news Islam Ahmadiyya. The views expressed by the author and source of this news archive do not necessarily reflect the views and policies of irabwah.