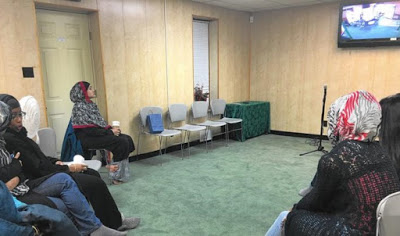 “It’s like the Lord’s Prayer for Catholics. Basically, we’re appealing to God for forgiveness, mercy and guidance to the right path.”

Between sips of coffee and bites of cake and fruit, members of the Ahmadiyya Muslim Community in Zion hope to make their guests feel comfortable at their mosque and free to ask questions about their religion.

The Ahmadiyya Muslim group began hosting “Coffee, Cake and True Islam” socials last month, with a purpose to reach out to community members who would like to learn about their beliefs and teachings.

Junayd Latif, outreach coordinator for the Zion chapter, said the hope is that through education, the group can help paint a more balanced picture of what true Islam is all about, instead of one where terrorism and extremists abound.

“We welcome everyone to come and see that we treat our community like our family,” Latif said.

The socials at the mosque, located at 2103 Gabriel Ave., begin with a prayer.

In separate rooms, men and women pray on rugs while their guests watch.

“It’s like the Lord’s Prayer for Catholics,” Shams said. “Basically, we’re appealing to God for forgiveness, mercy and guidance to the right path.”

Other prayers are made silently while bowing down.

“That’s when we ask God for the personal things that we want, like good health and peace,” Shams said.

Each Friday at 7 p.m. when the social starts, prayer time goes quickly and moves into discussions based on questions sent via the live video streaming app, Periscope.

On Friday, some of the queries ranged from why so much terrorism is linked to Muslims to what upcoming events the mosque would be hosting.

To the latter question, Rabbani responded that there are many. The most recent was Saturday’s Walk for Humanity event in Zion.

The event is part of the Ahmadiyya Muslim community’s national campaign for peace. Locally, the Zion group sponsors it each year.

Other annual events include a blood drive in honor of 9/11 victims and a food pantry in partnership with the Northern Illinois Food Bank.

Conversation with the Zion Muslim group members is also encouraged during the socials.

Group member Suriyya Latif said that so far, not many people have taken the opportunity to join them on the weekly event, but the invitation stands firmly.

“It’s not offensive to ask us questions. We welcome it,” she said. “How else are we going to disseminate that we represent peace, so that we’re seen as human beings?”