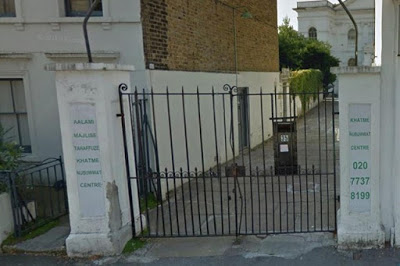 The mosque has been accused of ties to the Khatme Nubuwwat â€“ a group founded in Pakistan which is said to have been linked to several hate crimes against Ahmadis in the country.Â

The Charity Commission has launched a formal investigation into a south London mosque where leaflets calling for members of a minority Muslim sect to be murdered were allegedly found.

In April, leaflets calling for the murder of members of the Ahmadiyya sect â€“ a minority group which many Muslims consider heretical â€“ were allegedly found in Stockwell Green mosque.

The leaflets apparently said Ahmadis must convert to mainstream Islam within three days or face â€œthe capital punishmentâ€, meaning death. The mosque has denied they were responsible for the leaflets and claimed that they may have been left there maliciously to discredit them.

After Asad Shah’s ‘religiously prejudiced’ death, we know inter-Muslim hatred is a problem in Britain
Asad Shah murder: Facebook page celebrates killing of the popular Muslim shopkeeper
But the commission announced on Wednesday that it had launched a statutory inquiry into the charity that runs the mosque, Aalami Majlise Tahaffuze Khatme Nubuwwat.

In a statement the regulator said it had carried out monitoring visits to the mosque in May and July and had found wider serious regulatory concerns which had prompted the formal inquiry.

It said: â€œThe visits identified serious regulatory concerns regarding how the charity is being managed including indications of poor governance, risks to charity property due to poor financial management and the trustees carrying out activities outside of the charityâ€™s stated objectives.â€

It will also investigate the conduct of its trustees and whether they are fulfilling their duties in line with charity law.

The commission has not published its final report but it said in its interim report, seen by trade magazine Third Sector, that the panel noted the mosque had denied the leaflets were in the building and said it could not find evidence that they had been.

The mosque has been accused of ties to the Khatme Nubuwwat â€“ a group founded in Pakistan which is said to have been linked to several hate crimes against Ahmadis in the country.

A page on their website, called â€œFuneral of Qadyaniesâ€, says: â€œIt is forbidden for a Muslim to treat the Mirzai apostates like Muslims. It is unlawful, totally unlawful, to associate with them, eat and drink with them and participate in their joys and sorrows or to invite them to one’s own joys and sorrows.

â€œThose who show such kind of toleration invite the wrath of Allah and the Prophet and it does not befit a believer to maintain friendly relations with the enemies of Allah and the Rasool (messenger).â€

In 2010, The Independent revealed the organisation had been accused of handing out leaflets calling for violence against them in Kingston-upon-Thames.

But one of the mosqueâ€™s trustees, Toaha Qureshi, told the BBC the only link between it and the mosque is for â€œwhen we need some guidance or literature on that particular issueâ€.

Despite this, the mosque is still listed as the UK headquarters of Khatme Nubuwwat in accounts filed to the Charity Commission for the financial year 2012-13.

The Ahmadiyya sect was founded in India in the 19th century by Mizra Ghulam Ahmad.

Modern day Ahmadis believe Ahmad was a prophet â€“ which mainstream Muslims consider blasphemous as the Prophet Mohamed is believed to have been the last Islamic prophet.

The Independent has contacted a trustee of the mosque for comment.