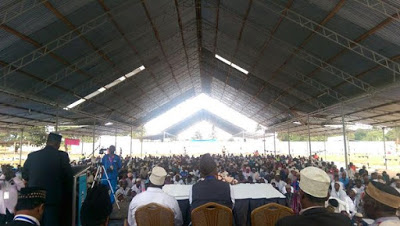 Ahmadiyya community has not been the source of a breach of peace around the world, as they unite together and pray for peace and solidarity of people in the community.’

DEPUTY Minister of Home Affairs, Mr Hamad Masauni, has called upon Muslim and non-Muslims to co-exist and love each other in order to maintain peace and security in the country.

The call was made by Mr Masauni at the 47th annual gathering of the Ahmadiyya Muslim Community (AMC) held in Dar es Salaam.

The congregation has attracted an estimated 3,500 visitors from within and outside the country to discuss various issues which include their annual assessment of their responsibilities.

â€œWe all are created by one God, no reason to live without love and cooperation with each other and praying for peace and solidarity on our nation for the benefit of all,â€ the Deputy Minister said.

He added that Ahmadiyya community has not been the source of a breach of peace around the world, as they unite together and pray for peace and solidarity of people in the community.

â€œI am delighted to say that your religion has not been the source of a breach of peace worldwide, so I asked you (Ahmadiyya) to continue to preach peace as God had commanded in all faiths,â€ he explained.

Mr Masauni has urged all religions to respect other religions as the government has no religion, saying all human beings are supposed to love each other for the development of every one and the nation at large.

He said that religious leaders have responsibility in ensuring that all community members live in love and peace. He thanked the Ahmadiyya Community for being at the forefront in providing support to the government particularly in the health sector, education and others.

Former President Ali Hassani Mwinyi said that it was a good thing for the Ahmadiyya community to meet together and discuss various issues as a way to improve their relationship.

He said that the meeting, which attracted many visitors from within and without the country, provided opportunity for Muslims to know each other.