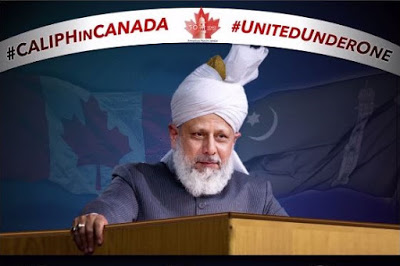 The religious leader of around 100 million followers is coming to Canada on Monday, but donâ€™t be surprised if you havenâ€™t heard of him.

Hazrat Mirza Masroor Ahmad, world head of the Ahmadiyya Muslim sect, will be arriving in Toronto, where heâ€™ll be welcomed to the country by Minister of Immigration, Refugees and Citizenship, John McCallum.

The leader of the largest Muslim community in the world united under a single leader â€” whose formal title is Caliph â€” has gained praise for his message of peace.

Heâ€™s given lectures at Capitol Hill, the U.K. House of Parliament and the European Parliament, where he advocated for humanitarian ideals, human rights and fair international relations. Heâ€™ll be taking his message to the National Peace Symposium in Toronto on Oct. 11.

This will be his Caliphâ€™s fourth visit to Canada since he took office in 2003. Heâ€™ll be spending six weeks in Canada â€” the longest tour of his career so far â€” and will travel around the country, said spokesperson Safwan Choudhry.

Along with visiting Ottawa for the first time and meeting with Prime Minister Justin Trudeau, the Caliph will also be visiting Western Canada.

Organizers of Mondayâ€™s event are expecting around 15,000 people to attend.

â€œItâ€™s unlike anything youâ€™ve ever seen before,â€ said Choudhry.

The event will feature a public reception ceremony on Ahmadiyya Ave. in Vaughan, where thousands of the caliphâ€™s followers will welcome him.

The Ahmadiyya faith is considered to be the fastest growing Muslim sect in the world, with over 80 chapters across Canada alone. The three largest mosques in Canada serve the Ahmadiyya community.