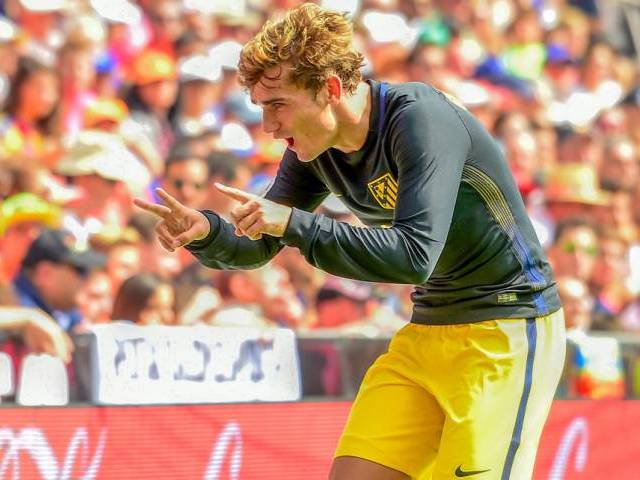 Atletico Madrid moved top of La Liga on Sunday as Celta Vigo edged Barcelona in a 4-3 thriller, whilst Real Madridâ€™s run of draws stretched to four against Eibar on Sunday.

Three goals in 11 first-half minutes sentenced a Barca side once again without the injured Lionel Messi as Pione Sisto, Iago Aspas and a Jeremy Mathieu own goal put Celta in command.

Gerard Pique and a Neymar penalty reduced Barcaâ€™s deficit. However, a Marc-Andre ter Stegen howler teed up Pablo Hernandez to restore Celtaâ€™s two-goal lead before Pique headed in his second late on.

Real Madrid remain two points ahead of the champions, but were booed off at the Santiago Bernabeu after a 1-1 draw against the Basque minnows.

Atletico lead their city rivals on goal difference at the top of the table despite missing two penalties as Antoine Griezmann and Kevin Gameiro netted in a 2-0 win at Valencia.

Barca boss Luis Enriqueâ€™s heaviest defeat in charge came in a 4-1 hammering at the hands of Celta last season and the former Celta coach suffered another embarrassing return to Balaidos.

Simeoneâ€™s Atletico future in doubt after changes in contract

â€œI canâ€™t be satisfied because we have thrown away the opportunity to go top before the international break,â€ said Enrique.Â â€œWe were clearly inferior in the first-half.â€

Former Liverpool striker Aspas did most of the damage as Sisto slotted home the opener from his superb through ball.

Aspas then drilled the second into the far corner and it was under pressure from the Celta striker that Mathieu turned Daniel Wassâ€™s excellent cross into his own net.

Enrique introduced Andres Iniesta on his 600th Barca appearance for the second-half and his presence transformed the Catalans after the break.

Pique headed home Iniestaâ€™s cross to give the visitors hope and a brilliant pass into Andre Gomes provoked a penalty just after the hour, which Neymar converted.

However, all of Barcaâ€™s good work was undone when Ter Stegen chipped the ball into the path of the onrushing Pablo Hernandez to head into an unguarded net.

Pique set up a grandstand finish three minutes from time and the centre-back was inches away from an incredible hat-trick when he glanced a header wide in stoppage time.

Earlier, Eibar celebrated their first ever goal and point against Madrid wildly.

It is the first time Madrid have drawn four successive games since Zidane was a Real player in 2006.

â€œIt is not a crisis. It is still October and I am not going to go crazy, but something is wrong,â€ said Zidane.Â â€œThe only thing I can see we can do is to work harder and play with more intensity.â€

The European champions badly missed the presence of Luka Modric, who is set to be sidelined for a month after undergoing knee surgery on Sunday morning.

Real took almost an hour to get firm control of the game and Cristiano Ronaldo had the chance to snatch the three points but blasted over from point-blank range.

A super Bale header also came back off the post and substitute Alvaro Morata had a goal rightly ruled out for offside as Eibar held on for a historic point.

Earlier, Valencia goalkeeper Diego Alvesâ€™s heroics couldnâ€™t deny Atletico as he extended his exceptional penalty record with stops from Griezmann and Gabi either side of the Frenchmanâ€™s opener just after the hour mark.

However, Gameiro finally sealed a deserved three points for Atletico in stoppage time.

New Valencia coach Cesare Prandelli watched on from the stands before officially taking charge on Monday, but other than Alves taking his record of saved penalties to 22 from 45 faced in Spanish football, there were few positives for the Italian.

Griezmann had hit the bar from the spot against Bayern in midweek and his well-struck penalty was brilliantly turned behind.

But Gameiro teed up Griezmann for his sixth La Liga goal of the season.

Gabi then saw a poor spot-kick easily saved by Alves, but deep into stoppage time Gameiro slotted past Alves to seal the win.