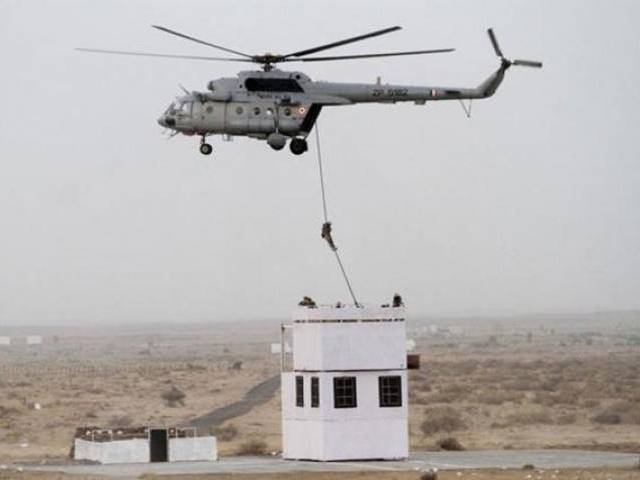 Just a day after India claimed that its armyÂ carried out â€œsurgical strikesâ€ inside Pakistan with the support of military choppers, a senior Indian minister retracted the claim saying â€œthese did not involve any aerial operations.â€

â€œThere were no aerial strikes,â€ Indian Minister of State for Information and Broadcasting Rajyavardhan Singh Rathore, himself an ex-Indian Army man, told The Hindu during an interview.

Rathore said the Indian Army crossed the Line of Control (LoC) â€œon the groundâ€ for carrying out what he termed were â€œpre-emptive strikesâ€. â€œThat is not like crossing the international border.â€

On Thursday, soon after the Indian military claimed that it had carried out â€œsurgical strikesâ€ against perceived â€œterrorist launch padsâ€ on the Pakistani side of the LoC in disputed Kashmir region, the Pakistani Army ripped to shreds the Indian farcical claim as an â€œillusion being deliberately generated by the Indians to create false effectsâ€.

Rathoreâ€™s remarks appeared to endorse the version of the armyâ€™s media wing, ISPR, which insisted: â€œthere has been no surgical strike by India, instead there had been cross-border fire initiated and conducted by India.â€

The IndianÂ Express had called it a â€œdefining momentâ€ but said the government mustÂ now be vigilant to ensure that the â€œclamour for moreâ€ did not fuel an escalation in hostilities.

The Hindustan TimesÂ welcomed the strikes in an editorial headlined â€œBefitting responseâ€, and said India would â€œtake satisfaction from the revenge, served coldâ€.

The Indian army provided little insight as to how the entire operation was conducted. The media there, however, said the operation was a combination of heliborne and ground forces. Special forces were para-dropped for the operation, it added. It said alleged terror launch pads targeted were in the range of 2- 3 kilometres from the LoC.

Some Indian news websites, which mentioned the use of helicopters in the operation: