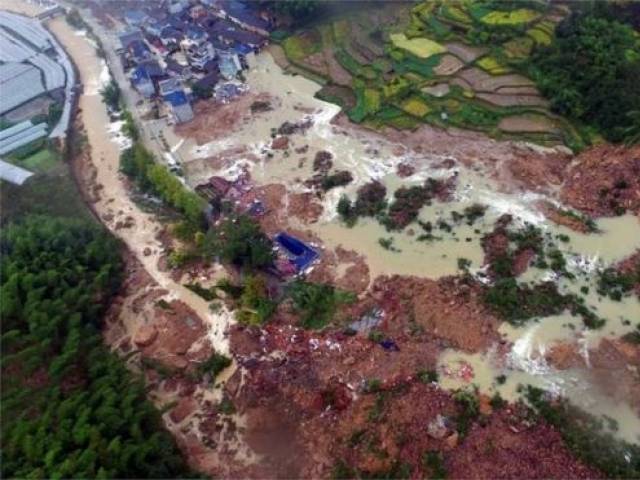 Heavy wind and torrential rains brought by Typhoon Medi triggered the landslides on Wednesday, burying dozens of homes from the villages of Sucun and Baofeng in Zhejiang provinceâ€™s Suichang county.

More than 4,000 rescue workers with 180 diggers were scrambling to find survivors but persistent rain and poor road conditions had hindered rescue efforts, the agency reported.

Video footage of the landslide on social media showed torrents of water and rock pouring down a mountain towards houses in the valley below while terrified onlookers screamed.

Typhoon Megi had already claimed one life on Wednesday morning, when a flash flood tore through the home of a villager in the coastal province of Fujian, according to reports.

At least 2.09 million people from three provinces have been affected by the typhoon, which has destroyed roughly 1,200 houses, the Peopleâ€™s Daily reported Saturday.

The storm is estimated to have caused China 5.53 billion yuan ($835 million) in damages.

The typhoon smashed into Taiwan earlier in the week, leaving a trail of destruction and killing seven as it raked across the island.

It also caused an estimated Tw$1.31 billion ($42 million) in agricultural damage and left more than four million households without power.