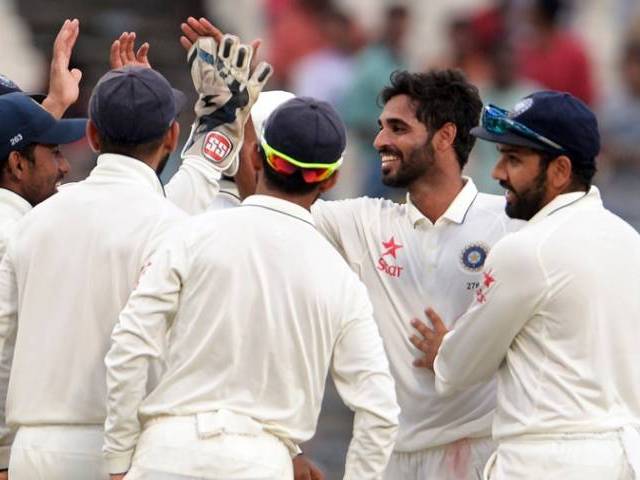 Bhuvneshwar Kumar picked up five wickets in a fine display of seam bowling to floor New Zealand after Wriddhiman Sahaâ€™s battling half-century helped India reach 316 on the second day of the second test at Eden Gardens on Saturday.

After India were dismissed shortly before lunch, their seamers did most of the damage as New Zealand staggered to 128 for seven at the close on a rain-interrupted day. BJ Watling (12) and Jeetan Patel (five) were at the crease for the touring side.

It was the fourth five-wicket haul for the 26-year-old Kumar, who replaced Umesh Yadav in the side. â€œIn India you rarely get this kind of wicket, so I wanted to make full use of it,â€ Kumar told the host broadcaster. â€œIt was one of my dreams to take five wickets in India.â€

Mohammed Shami struck first, trapping opener Tom Latham (one) lbw, before out-of-sorts Martin Guptill (13) departed when the ball ricocheted off of his elbow and on to his stumps after he lifted his arms to avoid a sharply-rising Kumar delivery.

Henry Nicholls (one) was out soon after play resumed in the second session when the left-handed batsman chopped Kumar on to his stumps to reduce the Kiwis to 23-3.

Stand-in captain Ross Taylor (36) and Luke Ronchi (35) took the fight to the hosts with a 62-run fourth-wicket stand before the latter was trapped in front by left-arm spinner Jadeja.

Kane Williamson hit by bug ahead of second Test

New Zealandâ€™s hopes rested heavily on Taylorâ€™s shoulders with regular captain Kane Williamson absent due to illness, but after a two-and-half hour rain delay, the right-hander pushed hard at a Kumar outswinger to be caught at first slip.

Earlier, resuming on 239-7, India, who lead the three-test series 1-0, added valuable runs through their lower-order batsmen, with Saha (54 not out) completing his third test fifty.

The 31-year-old Saha, who has cemented his place in Indiaâ€™s test side after the retirement of long-standing captain and wicketkeeper Mahendra Singh Dhoni, was struck on the elbow and the ribcage by some hostile New Zealand bowling.

But the right-hander did not flinch and brought up his fifty with a four and a six in successive deliveries off left-arm spinner Santner, much to the delight of the crowd, who applauded at length for the local player.