Perspective: Why Islamophobia Is Bad For America: A Rabbiâ€™s View 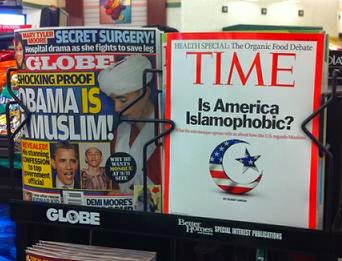 Perspective: Why Islamophobia Is Bad For America: A Rabbiâ€™s View

Today, it is common wisdom to maintain that there is a global clash of civilizations between the Muslim and the Christian worlds, in which the former is out to destroy the latter.

What many people today fail to realize is that there is a fundamental difference between the pre- and post-Cold-War world orders. Until the collapse of the Soviet Union in 1991, the world, divided into two irreconcilable ideologiesâ€”capitalism and communismâ€”each represented by a nuclear superpower, was living under a constant threat of global annihilation. But as the late Samuel P. Huntingtonâ€™s pointed out in his book The Clash of Civilizations, published five years after the end of the Cold War, the world is now facing a new reality of a clash along cultural and religious lines. Today, it is common wisdom to maintain that there is a global clash of civilizations between the Muslim and the Christian worlds, in which the former is out to destroy the latter.

But there are three problems with this world view:

First, terrorist organizations like ISIS do not represent the vast majority of the Muslim, or, more specifically, the Arab world, any more than Americans who on an ongoing basis murder innocent fellow Americans represent the vast majority of the American people. The main victims of terrorism perpetrated by Muslims are fellow Muslims, who are routinely killed on a much larger scale than Westerners.

Second, unlike the former Soviet Union, Muslim civilization does not have the means to destroy Western civilization. Today the so-called â€œclash of civilizationsâ€ is a global struggle among the seven main civilizations of the planetâ€”Latin America, Sub-Saharan Africa, Russia, India, China, the Muslim world, and the West, manifesting itself on many different levels of national and regional interests.

Thirdâ€”and this is by far the most important and the least understood of the three, while political and economic ideologies like capitalism and communism are mutually exclusive and can never be reconciled, religious ideologies like Islam and Christianity, and, for that matter, all the other major religious ideologies and spiritual philosophies of both the West and East, are remarkably similar in their underlying beliefs. They all teach that peace is better than war; that kindness is better than violence; that respect for all people is better than discrimination, and so on. All one has to do is look up what the scriptures and prayer books of the various faiths have to say on those subjects.

In other words, todayâ€™s post-Cold War world, despite the plagues of terrorism and societal violence, which are Â dwarfed by the devastation of the twentieth century in which more than 500 million human beings perished in wars and genocides motivated by political ideologies, has a golden opportunity to bring the human race together and move towards a greater world cooperation.

Finally, no country is better suited to lead the way in this quest than the United States of America. Over a century ago, BahÃ¡â€™uâ€™llÃ¡h, the founder of the Bahaâ€™i faith which was born out of Islam, predicted that the United States was destined to bring the human race together in peace and harmony. Rather than succumb to Islamophobia or any other kind of xenophobia, America may now have what President Franklin D. Roosevelt once referred to as a new â€œrendezvous with destiny.â€

A Rabbiâ€™s View, Is Bad For America, Perspective, Why Islamophobia