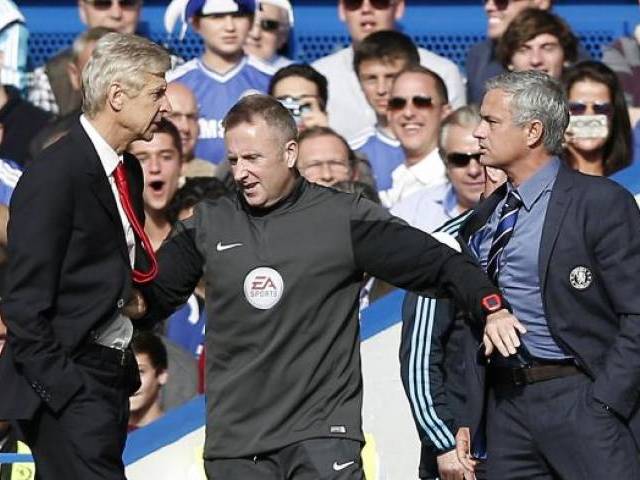 Arsenal manager Arsene Wenger said on Friday that he preferred to avoid a â€œdestructive modeâ€ as he played down claims that adversary Jose Mourinho had once wanted to â€œbreak his faceâ€.

The Frenchman said that he is concentrating solely on the Gunnersâ€™ Premier League clash with Chelsea on Saturday and did not want to linger on the controversial quote, contained in a new biography of Manchester United boss Mourinho being serialised in the Daily Mailnewspaper.

Wenger, celebrating his 20th anniversary with the Gunners, clashed repeatedly with Mourinho when the Portuguese was in charge of London rivals Chelsea.

According to the new biography, Mourinho allegedly once told the author, football journalist Rob Beasley, when discussing Wenger: â€œI will find him one day outside a football pitch and I will break his face.â€

But Wenger, 66, keen not to add any fuel to the fire, told a news conference: â€œLook, I havenâ€™t read the book and I certainly wonâ€™t read it.

The Frenchman added: â€œWhat is amazing is that has nothing to do with our game tomorrow. I personally am just focused on doing my job well and respecting everybody else.

â€œI do not want to especially comment because we play Chelsea tomorrow. I have no personal problem with anybody, I respect everybody in our game and I donâ€™t feel I comment a lot on other teams. Sometimes I just say what I think, but that is part of the way I am.â€

Wenger added that the rivalry between Arsenal and Chelsea, where Antonio Conte is now in charge, was about more than his fractious relationship with Mourinho, who was sacked last season by Chelsea and took over at United this summer. â€œHonestly, for me it was always just a big game and an important game, and the personal rivalry that you suggest existed stronger before was never, in my head, a concern,â€ he added.

Asked if he would reveal his thoughts on Mourinho one day in an autobiography, Wenger replied: â€œI donâ€™t know, I will maybe make a book one day, but I am not ready for that yet.â€

Mourinho was due to hold his regular Friday press conference later in the day.