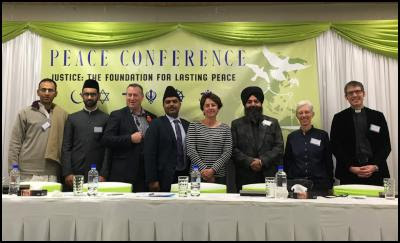 â€œAhmadiyya Muslim Community worldwide continues to engage all faith groups to find means to achieve global peace. The conference today was a small step on our long journey towards that goal.”

Pete and I visited New Zealandâ€™s largest mosque which belongs to the Ahmadiyya Muslim community April this year. They spoke of their commitment to peace with all faiths. A recent meeting that they arranged in Auckland is a testimony to their actions matching their words.

I was interested to know if representatives from Sunni Islam and Shia Islam were at the meeting as most if not all of them do not recognise the Ahmadiyya community as being true Muslims. I sent an e-mail to one of the men I met at the Mosque and he kindly replied saying that, â€œthe peace conference was attended by other Muslim members as well.â€

The Ahmadiyya community needs to be recognised for their commitment to peace between all religions. They have even written a book about it.

We are very quick to condemn Muslim leaders for not speaking out after Islamic terrorist attacks and condemning the slaughter. We cannot condemn the Ahmadiyya Muslim community for lack of words or action. They represent Muslims in New Zealand who are accepting of those with different beliefs to themselves and who wholeheartedly condemn the slaughter of Muslims and non-Muslims alike. If New Zealand is to stay free of the terror and strife already rampant in Europe we must make the most of every advantage at our disposal. The Ahmadiyya Muslim community wants New Zealand to remain conflict and terrorism free as much as we non-Muslims do and they are doing their part to help keep it that way.

Faith leaders from several mainstream religions joined hands today to find ways to achieve lasting peace. The meeting in Auckland was arranged by the Ahmadiyya Muslim Community New Zealand and was entitled, Justice: The Foundation for Lasting Peace.

â€œA recent survey has ranked New Zealand as the fourth most peaceful country to live in. What sets us apart though is that we are also one of the most technically diverse societies in the western worldâ€, says Dame Susan Devoy, the chief guest for the event. â€œIt is encouraging to see that leaders of so many different faiths have come together for one purpose â€“ of achieving peace through their beliefs. The challenge for us as a society going forward though is to take the message originating in this room to the New Zealand population at largeâ€.

It certainly will be a challenge as Sunni Islam and Shia Islam have key differences to Ahmadiyya. They certainly do not share their motto of Â â€˜Love for all and hatred for noneâ€™ The fact that the Ahmadiyya have been targeted for slaughter by Muslims from other sects because they consider them apostates cannot be ignored. I can understand Susan Devoy thinking that Islam is a religion of peace if most of her interactions have been with the Ahmadiyya community.

Leaders representing the Hindu, Sikh, Christian, Buddhist, Jewish, and Islamic faiths all highlighted how religion can play a positive role in promoting peaceful coexistance, and increasing cohesion in the society. The speakers and guests at the event acknowledged and thanked the Ahmadiyya Muslim Community for arranging the meeting, and for providing a platform for a positive discussion to take place.

â€œAhmadiyya Muslim Community worldwide continues to engage all faith groups to find means to achieve global peace. The conference today was a small step on our long journey towards that goal. The commitment shown by our fellow faith leaders today was heart warming â€ said Acting President for the Ahmadiyya Community, Mr Yunus Hanif. He thanked the religious leaders and Dame Susan Devoy for helping make the event a success. The meeting in the Three Kings suburb of Auckland was attended by over 160 guests.

The Ahmadiyya Muslim Community is a dynamic, fast-growing international revival movement within Islam. Founded in 1889 by Hadhrat Mirza Ghulam Ahmad (1835-1908) in Punjab, India, the Ahmadiyya Muslim Community spans over 206 countries with membership exceeding tens of millions. Its motto of â€˜Love for all and hatred for noneâ€™ is evidenced through the peaceful actions of its millions of followers. The New Zealand branch of this community was established in 1987 and has just over 400 members.