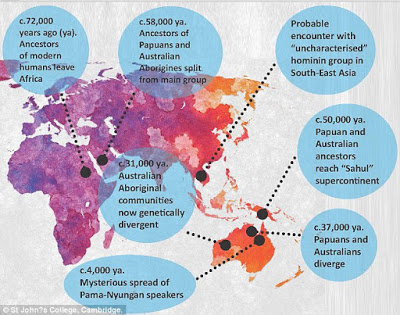 The most detailed genetic study of Indigenous Australians confirms the group is the oldest continuous civilisation on the planet.

The civilisation dates back more than 50,000 years ago, according to a new paper that was published alongside two others in Nature.

The research claims that around 72,000 years ago, a group of migrants began the journey out of Africa that would ultimately shape the future of humanity.

This single wave of travellers gave rise to all non-African populations alive today.

In the first major genomic study of Aboriginal Australians, researchers have confirmed that along with European and Asian ancestral groups, Papuan and Australian genomes too can be traced back to this migration.

The new evidence supports the idea that there was just â€˜one exit eventâ€™ â€“ but once out of Africa, the Papuan and Aboriginal ancestors branched off early on, with some eventually reaching Australia, where they would remain isolated from the rest of the world for thousands of years.

In the study, published to the journal Nature, an international team of experts collaborated with elders and leaders from various Aboriginal Australian communities, along with numerous other organizations.

The researchers sequenced the genomes of 83 Aboriginal Australians and 25 Papuans from New Guinea, using DNA from saliva to reveal new insight on the origins of modern human populations.