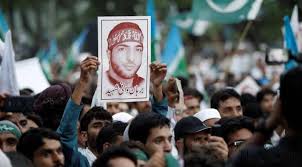 : A senior Pakistani diplomat has rejected a claim by an Indian delegate thatÂ PakistanÂ was promoting terrorism in Indian heldÂ KashmirÂ and elsewhere, saying the Kashmiri peopleâ€™s uprising â€œwas spontaneous and indigenousâ€.

The Indian delegate, Eenam Gambhir, made the accusation while exercising her right of reply to Prime Minister Muhammad Nawaz Sharifâ€™s speech in the UN General Assembly in support of Kashmiri people.

â€œThe Indian government has chosen to criticize the statement by the Prime Minister of Pakistan, which reflects the sentiments and aspirations of the oppressed people of Jammu and Kashmir, who have, for seventy years faced bullets, repression and the brutalities of illegal occupation,â€ Dr. Muhammad Faisal, a director general in the Foreign office, said in the 193-member Assembly while reacting to some serious allegations leveled by Ms. Gambhir.

â€œThe cold-blooded murder of Burhan Wani sparked widespread and unprecedented protests acrossÂ Kashmir, which was spontaneous and indigenous and was irrefutable evidence of the Kashmiri peopleâ€™s rejection of Indian occupation,â€ Faisal told the General Assembly.

â€œBut peaceful protesters were mercilessly fired upon, blinded and critically injured,â€ he said. â€œYet, the use of brutal force cannot extinguish their burning aspiration. Every day young and old come, defying the curfew and dodging the bullets, only to assert their right to determine their own destiny.

â€œThe Right to self-determination has been promised to them by the international community through a series of Security Council resolutions. Although this promise has yet to be realized, seven decades later, time has not weakened their resolve, nor their aspirations. In fact, it remains active and vibrant in the hearts of the Kashmiris.â€™

The Pakistani diplomat said the Kashmiri people looked towards the international community, especially the members of the UN Security Council, to deliver on the pledge to hold a free, fair and impartial plebiscite under the UN auspices, to enable them to decide their future, a democratic and legal right of the Kashmiri people