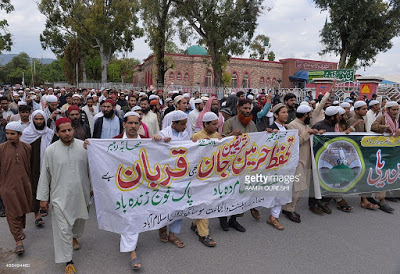 Pakistanâ€™s national action plan against terrorism has proved a non-action plan as far as the crackdown on sectarian groups is concerned.

On September 13, two suicide bombers attempted to target an imam bargah (Shia Muslim mosque) during the Eid prayers in the district of Shikarpur in Pakistanâ€™s Sindh province. The carnage was averted when one of the suicide bombers detonated his suicide vest at a police checkpoint leading to the mosque when security officials tried to stop him. The other terrorist was arrested by the police after a failed attempt at detonating his explosive vest. Four security officials were injured in the incident.

Reportedly, the arrested suicide bomber has revealed that he was a student at one of the madrassas (religious schools) run by the Ahle Sunnat wal Jamaat (ASWJ), a proscribed sectarian organization that has spread anti-Shia hatred for decades. During the 1990s, the group was actively involved in a number of high profile attacks on Shia scholars, mosques, and gatherings. Previously, the organization was registered under the name of Sipah-e-Sahaba Pakistan (SSP). However, after the banning of SSP by General Pervaiz Musharaf in 2002, the organization reemerged under the name of ASWJ.

What is more problematic is that despite the ban, the organizationâ€™s activities have continued without any significant pressure from the government. In fact, besides remaining actively involved in sectarian killings, ASWJ remains openly engaged in politics: the organizationâ€™s open campaigns to woo the military and major political parties through rallies, gatherings and addresses at universities and colleges have become a common practice. These rallies often run under the guarantee of state security, with law enforcement agencies standing guard for their protection.

The organizationâ€™s successful campaign of terror has survived with alliances and the support of various major and small political parties. There have been reports of a seat adjustment agreement between the current ruling party and the ASWJ. Raza Rumi, a Pakistani journalist and policy analyst, in his newly published book, The Fractious Path: Pakistanâ€™s Democratic Transition notes that in Pakistan, â€œthe most disturbing political feature is the kowtowing to militant outfits by local political parties for electoral gains. Most notably, the Pakistan Muslim League-Nawaz has entered into local, unwritten agreements with the Ahle Sunnat Wal Jamaat. Such an alliance may favor the Pakistan Muslim League-Nawaz in the short term, but would have a high cost to Pakistani society overall. â€

Moeed Yousaf, the associate vice president of the Asia Center at the U.S. Institute of Peace, in an article published in Dawn under the headline â€˜Not really a planâ€™ argues that Pakistanâ€™s current counterterrorism plan, called the National Action Plan (NAP), â€œwasnâ€™t a thought-out document. It was a list of bullet points meant for the prime minister to show that the APS (Peshawar Army Public School) attack had woken us up.â€ He further asserts that â€œOne thing it doesnâ€™t have is a plan. Not one of its 20 points has been unpacked to say how precisely it will be achieved, and in what time frame. Or even more importantly, there is no sense as to why we decided on these 20, and if these are actually things that can add up to bring sustainable peace to the country.â€

Moreover, what is worse is that the military and the government are not even committed to the so called â€œ20 bullet pointsâ€ framed to counterterrorism in the country. The outcome: sectarian organizations such as ASWJ and others, which according to NAP should not be allowed to get an inch of space in Pakistan, are openly setting up factories of suicide bombers.

Besides inciting hatred against Muslim minority communities in the country, ASWJ has also opposed any reforms in Pakistanâ€™s blasphemy laws. One audacious example of this is the groupâ€™s defiant march against the stateâ€™s decision to hang the murderer of Salman Taseer, the Governor of Pakistanâ€™s Punjab province, who was killed by one of his security guards on accusation of having committed blasphemy. In the process, the group has also put pressure on the more moderate and liberal segments of the country to silence their voices. Number of political and social activists, including Raza Rumi, Sherry Rahman, and Javed Ghamidi were forced to leave the country in fear for their life.

Unless the negative interpretation of Islam is controlled in the societal space and radical Islamist groups are stopped from disseminating violent messages as part of Â religion, no counter terrorism plan, regardless of how effective, can proved successful in eradicating terrorism from Pakistan.