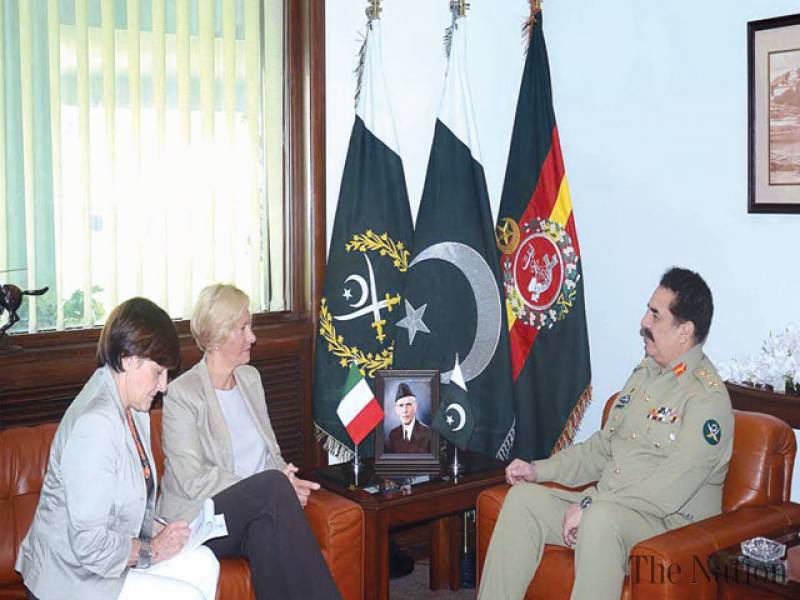 During the meetings, wide range of issues of mutual interest, including defence, security cooperation, training and measures contributing towards regional stability came under discussion.
General Salih Zeki Colak was given detailed briefing on operational, intelligence and training aspects of Pakistan Army.
The visiting dignitary lauded the unparalleled achievements of Pakistan Army and sacrifices made in fight against terrorism.
Earlier on arrival at General headquarters, Commander of the Turkish Land Forces laid a floral wreath at Yadgar-e-Shuhada.

A smartly turned out contingent of Pakistan Army presented the guard of honour to the visiting dignitary.
The delegation is scheduled to visit training institutions, including recently established state-of-the-art National Counter Terrorism Centre at Pabbi.
Meanwhile, SenatorÂ Roberta Pinotti, Minister for Defence of Italy also called on General Raheel Sharif.
According to ISPR, matters of mutual interest, including defence collaboration and regional security were discussed during the meeting.

The visiting dignitary lauded successes and achievements of operation Zarb-e-Azb and acknowledged the resolve and sacrifices of Pakistani nation and armed forces in fight against terrorism.
Source The nation