Russia trying to recover past glory through force: Obama 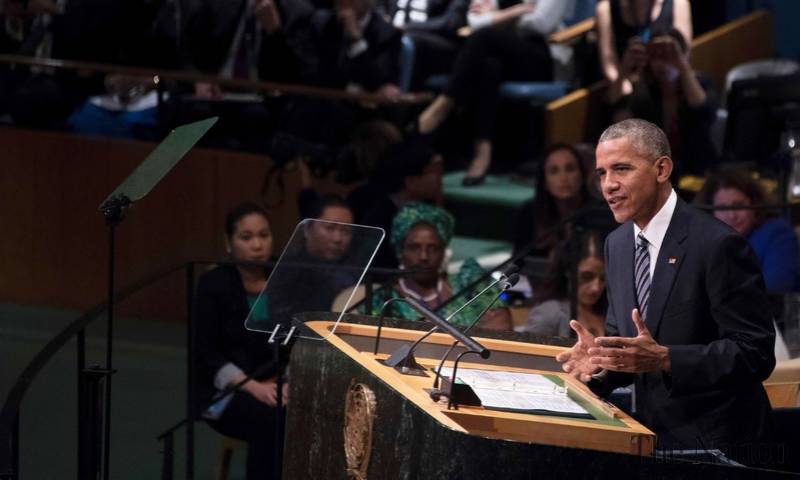 Russia trying to recover past glory through force: Obama

NEW YORK: US President Barack Obama accused Russia of trying to recover power through force, amid Moscow’s military involvement in Syria and Ukraine.

â€œIn a world that left the age of empire behind, we see Russia attempting to recover lost glory through force,â€ Obama said in his final address to the United Nations General Assembly.

No military solution in Syria

Obama insisted diplomacy is the only way to end the brutal five-year conflict in Syria, as a ceasefire brokered by Washington and Moscow lay in tatters.

â€œThere’s no ultimate military victory to be won, we’re going to have to pursue the hard work of the diplomacy that aims to stop the violence and deliver aid to those in need,â€ Obama told the United Nations.

His comments came hours after 18 UN aid trucks were destroyed as they tried to bring relief to war-ravaged citizens near Aleppo.

The US president urged the world to bring the Paris climate deal into force as soon as possible, calling on leaders not to leave future generations to fix the problem.

â€œIf we don’t act boldly, the bill that could come due will be mass migrations and cities submerged and nations displaced and food supplies decimated and conflicted born of despair,â€ he said.

â€œThere must be a sense of urgency about bringing the agreement into force and helping poorer countries leapfrog destructive forms of energy.â€

Obama, past glory, Russia, through force, trying to recover