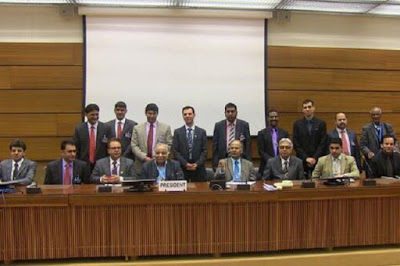 Maintaining that law enforcers are acting with impunity in the country, Ali said that Pakistan blasphemy law is being used to persecute the religious minorities.

Geneva [Switzerland], Sept. 19 : Taking a jibe at Pakistan over the atrocities on the people in Balochistan and Gilgit-Baltistan, and the religious minorities in the country, United Kashmir People’s National Party (UKPNP) chief Shaukat Ali on Monday said that his party has appealed to UN High Commissioner for Human Rights, Zeid Ra’ad Al Hussein, to organise and send a UN fact finding delegation to Islamabad.

Ali made the remark as he along with the members of his party held protest to highlight the issue before the UN office in Geneva.

“UKPNP appeals to UN High Commissioner for Human Rights to organise a UN fact finding delegation to visit Pakistan,” he told ANI, adding that the organization would like to bring to the UNHRC’s notice the blatant human rights violations by the Pakistan Government and military on the people of Pakistan occupied Kashmir (PoK) and Gilgit Baltistan.

Asserting that Pakistan has established military courts in the country, Ali said that this move is a clear violation of international law where civilians are tried by a military tribunal.

He said that this is a serious blow to human rights and rule of law in the country.

“The trail of civilians in military court is incompatible with international standard including Article 4, 14 of the International Covenant on Civil and Political Rights (ICCPR) which requires Pakistan to ensure that those accused of any offence, no matter how heinous, are granted a fair trial,” he added.

Highlighting the China -Pakistan Economic Corridor (CPEC), he said Islamabad is constructing mega dams as per the proposed project without consulting the local population.

Ali further said the construction of CPEC is in clear violation of the international law.

He emphasized that extrajudicial killings were also taking place in Pakistan, which is a symptom of dysfunctional judicial and criminal justice.

“Enforced disappearances have also become a common occurrence in Pakistan as consequences of absence of rule of law. In Balochistan, various human rights organisations have reported that around 14,000 people are missing whereas the provincial government recognizes less than 100 have been missing,” he added.

Maintaining that law enforcers are acting with impunity in the country, Ali said that Pakistan blasphemy law is being used to persecute the religious minorities.

“Pakistan blasphemy law is being used to persecute religious minorities like Christian and Hindus to settle personal vendetta. People accused of blasphemy have been murdered before their respective trials are over and prominent figures who oppose the blasphemy law have been assassinated,” he added.

He also said that everybody is facing discrimination in Pakistan on the basis of their Constitution.

Meanwhile, the members of World Sindhi Congress and Baloch people also held protest to highlight the similar issue including the plight of their community in Pakistan.

Lakhu Luhana, the chairman of the World Sindhi Congress, said that 70 percent of Sindhi people in the country suffer from malnutrition and most of them are illiterate and unemployed.

He also emphasized that the CPEC is the biggest problem now.

“There were already many problems, but now our biggest problem is CPEC. The other issues include human disappearances, extra judicial killings and denial of our human rights,” Luhana told ANI.

He further said that those people who raise their voice against Pakistan are at risk, adding this is the reason as to why they are raising their voice.

“Pakistan has all along supported terrorism. It has become a menace,” he added.