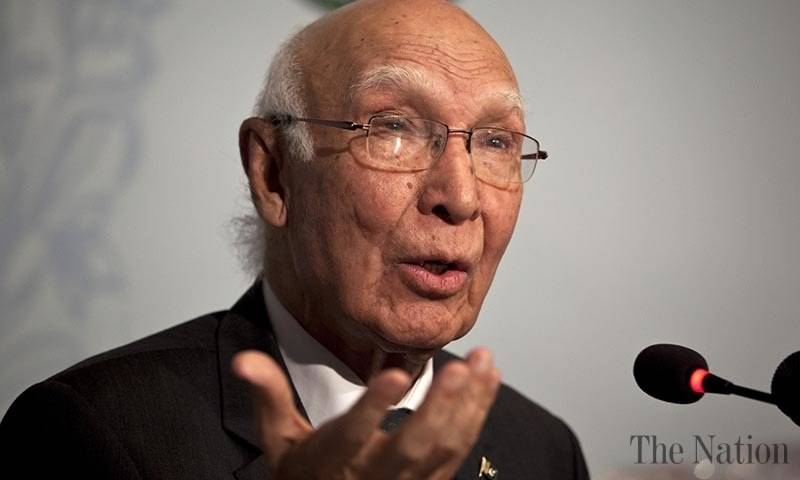 NEW YORK: The Adviser to the Prime Minister on Foreign Affairs, Sartaj Aziz has categorically rejected Indiaâ€™s â€œbaseless and irresponsibleâ€ accusations against Pakistan followingÂ Sundayâ€™sÂ attack on Indian troops in Indian Occupied Kashmir, calling it a â€œblatantâ€ attempt to divert attention from the deteriorating situation in IOK.

In a statement soon after his arrival here from Venezuela, the adviser said, â€œPakistan has noted with serious concern the recent spate of vitriolic and unsubstantiated statements emanating from Indian civil and military leadership in the aftermath of yesterdayâ€™s attack on Indian occupation forces in the Uri sector of the Indian Occupied Kashmir (IOK)â€.

â€œPakistanÂ categorically rejects the baseless and irresponsible accusations being leveled by senior officials in Prime Minister Modiâ€™s Government. It is a blatant attempt onÂ Indiaâ€™s part to deflect attention from the fast deteriorating humanitarian and human rights situation in the Indian occupiedÂ KashmirÂ since the death of Burhan Waniâ€.

â€œIt needs to be understood that the situation in IOK is not ofÂ Pakistanâ€™s making but a direct consequence of illegal Indian occupation and a long history of atrocities that has resulted in over a 100 deaths. More than 100 people have died and thousands injured during the recent episode of protest and ongoing curfew in the occupied territory over the past 73 days.â€

â€œA large number of youth have been blinded by the indiscriminate firing of pellet guns. Nobody has been spared the brute state force including the elderly, wounded patients in hospitals as women and children. This should awaken international conscience.â€

â€œIt was particularly deplorable that (an) Indian minister chose to blameÂ PakistanÂ for the incident even prior to conducting proper investigation. The statement is part of a pattern to mislead world opinion and cover upÂ Indiaâ€™s reign of terror in IOK.â€