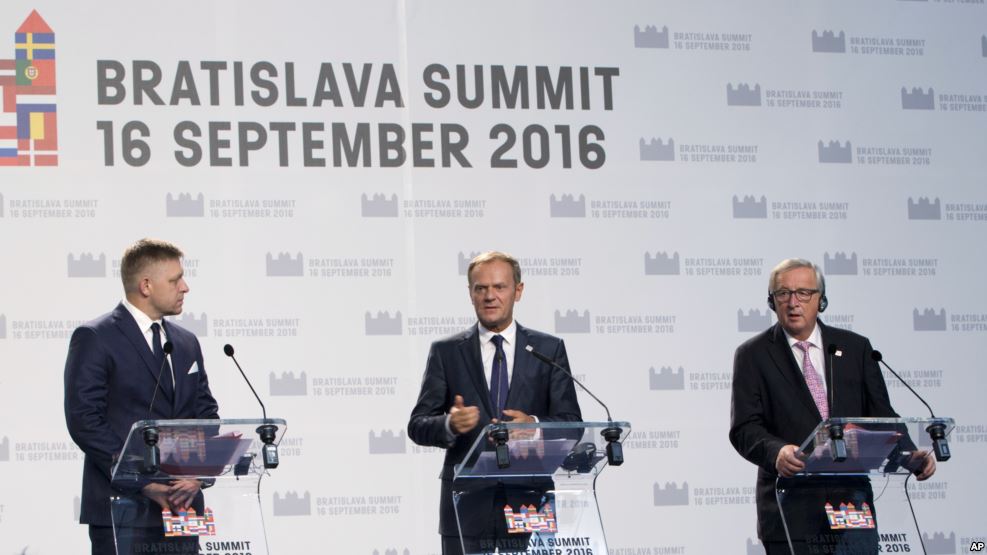 The 27 leaders committed themselves to deciding on a clear strategy and practical steps to rebuild trust in the EU when they meet again in six months. That regular summit in early 2017 also will mark the 60th anniversary of the EU’s founding treaties.

Not only the decision by British voters to break away from the EU but other serious problems as well have have contributed to “the critical situation” that confronts the European partners, Merkel said. “We must jointly agree on an agenda” and forge “a working plan to be able to handle the respective issues.”

European Union leaders want to come up with a post-Brexit strategy by March, although it is unclear how long it will take Britain to actually exit the union. British Prime Minister Theresa May, who did not attend the summit, is not expected to trigger the process until early next year.

The president of the European Council, Donald Tusk, said the mood among the remaining members of the political and economic alliance was “sober but not defeatist.” He said the bloc wanted to “correct the past mistakes and move on with new solutions.”

However, despite those pledges to arrive at a plan to move forward, disagreements continued over how to handle the influx of refugees into Europe.

Hungarian Prime Minister Viktor Orban, one of the most critical voices on the issue, said there should be no more “lawmaking tricks” from EU institutions, such as the European Parliament’s move to require member states to accept refugee resettlement quotas.

EU members also are deeply divided about the economic effects of immigration and asylum issues.

France and Germany, two of the alliance’s oldest and most influential members, also pushed Friday for closer EU defense and security collaboration, another subject that has divided the bloc.