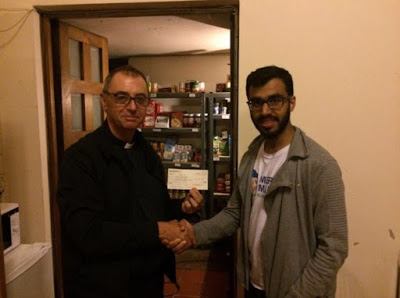 As soon as members of the Ahmadiyya Muslim Youth Association (AMYA) heard about the theft, they began fundraising in their Tudor Road mosque in Stratford.

St Paulâ€™s Church in Stratfordâ€™s Maryland Road had the majority of its food stock taken just before a planned giveaway morning.

Police said the suspected burglars, who are thought to have struck between 8pm on August 22 and 8am on August 23, have not been found but an investigation is ongoing.

Another positive to follow the foodbank burglary was the bringing together of faiths.

As soon as members of the Ahmadiyya Muslim Youth Association (AMYA) heard about the theft, they began fundraising in their Tudor Road mosque in Stratford.

â€œWe do a lot of work with homeless people, so the foodbank seemed a great cause.

He added: â€œIt was exactly what we want to see in the community â€“ being brothers in arms.â€

The AMYA raised Â£200 in just one afternoon and handed it over to St Paulâ€™s in a cheque on Wednesday last week.

Mr Khan said Rev Fraser was â€œvery, very happyâ€ and sent him a â€œreally niceâ€ email to express his thanks.

â€œThere have definitely been good things coming from this.â€

He added: â€œOur motto is, â€˜Love for all and hatred for noneâ€™ and it doesnâ€™t matter what faith people are.