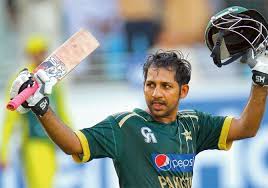 MANCHESTER – Sarfraz Ahmed is ready to put his stamp on Pakistan’s Twenty20 captaincy, in his first match in charge since his appointment five months ago.

Sarfraz inherits a squad with a belated feelgood factor after his and Shoaib Malik’s big-hitting helped the majority of them re-discover a winning feeling against England in Sunday’s final one-day international in Cardiff.
That brought a sole consolation success at the end of the Royal London Series, preventing a maiden 5-0 whitewash on home soil for England.

Victory in the one-off NatWest Twenty20 would, therefore, earn the tourists a claim to be honours even over all formats – if not a share of the Super Series England has already wrapped up – after the drawn Investec Test series.

For Sarfraz, the time has come to begin establishing a new era as successor to veteran Shahid Afridi – who stepped down as captain after Pakistan’s early exit from last spring’s ICC World Twenty20.

“I am really excited about the captaincy,” the wicketkeeper-batsman said, on the eve of what is likely to prove a tough examination of his team’s credentials against Eoin Morgan’s World Twenty20 finalists.

Sarfraz is eager to bring his own adventurous approach to bear.
“Representing the country is a big achievement, but I am really excited to lead.
I am trying to lead everything and to play positive cricket and win tomorrow.
”

Pakistan’s limited-overs teams have been notably less successful in recent years than their table-topping Test counterparts.
Sarfraz, a regular in all formats, is intent on greater consistency.

“The Test team is very settled – they have played six years together,” he said.
“After the World Cup, we are trying to develop a new ODI team – and the morale is high after Cardiff.
It’s a positive thing for us to win from 4-0 down – a great achievement chasing 300 outside of Asia.
We are very confident.
We are trying to develop a new team with youngsters and play Twenty20 like England and Australia.
”

Pakistan’s Test captain Misbah-ul-Haq has become a unifying force, and role model for Sarfraz.
“I think Misbah is an inspiration for all the team – he inspired me,” he said.
“I have developed something from him and will try my best.
”

Umar Akmal remains a notable absentee from Pakistan’s squad, following his disciplinary issues over the past year, and Sarfraz would be delighted to see the powerful batsman back soon.
“He’s a great player and performing well,” he added.
“I hope he will come back for the next tour.
”

In the shorter term, win or lose in the final match of their trip, Sarfraz can reflect on a tour which has cemented relations with the hosts and with Pakistan’s own supporters after much damage was done by the spot-fixing saga on their last visit six years ago.

“We have enjoyed this tour and found people have been welcoming,” he said.
“We hope we win the match and end on a high note.
”