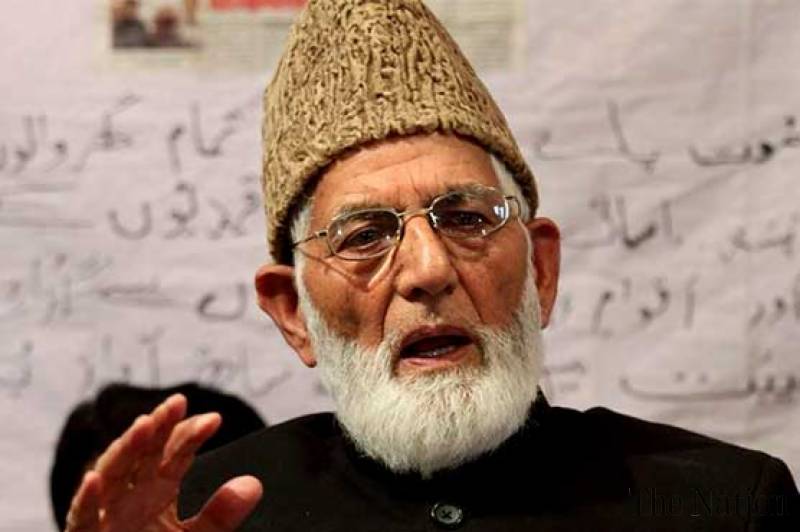 Srinagar: In occupied Kashmir, the Chairman of All Parties Hurriyet Conference, Syed Ali Gilani referring to the assertions made by Indian Home Minister Rajnath Singh has questioned Indian champions of â€˜Humanity and Democracyâ€™ and asked whether its humanity to use deadly weaponry against peaceful protesters in the territory.

Syed Ali Gilani while addressing a womenâ€™s gathering at Rahimu in Pulwama and Seer Hamdan in Islamabad said, India claims to have the most brave and disciplined army of the world, but in reality they are so coward that they shower bullets and pallets on unarmed people especially teenagers. â€œThey test their muscles and arsenal on peaceful protestors who are just demanding a basic and fundamental right, right to self-determination promised by their own leaders,â€ he added.

Syed Ali Gilani said our protesters are fired at, our congregations are ransacked with tents burnt and sound system taken away. â€œEverywhere there are protests, be it violent, nowhere in the world nor in India itself they are showered bullets, but we being Muslims fighting for own rights in Kashmir, every tool of state terrorism including bullets, pallets, arrests, killings, rapes, and harassments are legalized and justified in the grab of so-called national security,â€ he said.

He further said seeing the innocent killings on a daily basis every human eye gets moist and every heart is touched, but the local collaborators and the partners of this genocide claiming to be the champions of the â€˜Humanity, Democracy & Kashmiryatâ€™ have turned deaf and dumb.

While reacting to the fresh reign of terror throughout the territory including Pir Panchal, Chinab and valley, Gilani said occupation forces enter the localities in the dark hours, ransack the houses, beat the inmates, terrorize and harass the families especially women and children and if the population protests against these brutalities and inhuman actions the armed forces start firing and shelling, killing and injuring them.

The APHC Chairman said that by the grace of Almighty Allah and steadfastness of the Kashmiri people, the blood of martyrs would not go waste. He said that women had an important role to play in this movement. They should strictly adopt the moral and ethical values and should encourage their men to contribute to this movement through thick and thin.