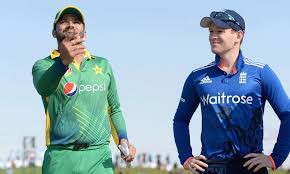 Captaining Pakistan for the first time, Sarfraz Ahmed admitted that he would have liked to bat first.

The wicketkeeper batsman further added that he wants to end the England tour on a high note with a win, during the post-toss conversation with Mike Atherton.

Fast-bowler Sohail TanvirÂ makes a returnÂ to the national side after a 10-month-long hiatus.