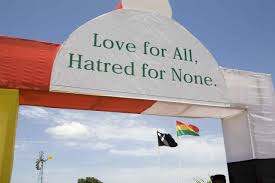 During his Friday Sermon, Hazrat Mirza Masroor Ahmad mentioned that this year was the 125th anniversary since the first Jalsa Salana took place in the small Indian town of Qadian in which just a few dozen people participated.

Urging the media to promote peace Hazrat Mirza Masroor Ahmad said â€œthe media should play its role in establishing peace in the world by being fair and just in itâ€™s reporting. For example, here in Germany today many thousands of people have joined together in order to promote peace, yet the media will not give it anywhere near as much coverage as it would to reports of terrorism or extremism.â€

Prior to the Friday Sermon, His Holiness raised the Flag of the Ahmadiyya Muslim Community (Liwa-e-Ahmadiyyat) to officially inaugurate the event, whilst the German National Flag was also raised.

During his Friday Sermon, Hazrat Mirza Masroor Ahmad mentioned that this year was the 125th anniversary since the first Jalsa Salana took place in the small Indian town of Qadian in which just a few dozen people participated.

His Holiness also outlined the true objectives of the Jalsa Salana as laid down by the Founder of the Jamaâ€™at â€œthe purpose of our Annual Convention is to rejuvenate and increase the faith of Ahmadi Muslims and to bring about a spiritual and moral reformation in their lives. Further, itâ€™s purpose is to spread the truth peaceful teachings of Islam and to increase in brotherhood and love for mankind,â€ said Huzur.

He added that â€œit is a source of deep regret if a person considers this Jalsa Salana to be a worldly festival rather than coming here with pious intentions. Therefore, we should set aside all forms of materialism and worldliness during these three days and thereafter when you return to your daily lives you should do so with the firm conviction of continuing to display the highest standards of morality and piety at all times.â€

Both prior to and following the Friday Sermon, His Holiness held a press conference with members of the German media during which he answered questions about the purpose of Jalsa Salana, the continued rise of terrorism and extremism and the refugee crisis in Europe.

Upon being asked about widespread fear of Islam in Germany, Hazrat Mirza Masroor Ahmad said â€œat the very start of the Holy Quran it states that Allah the Almighty is He who is Gracious and Ever Merciful and so it is impossible for Islam to advocate any form of cruelty, injustice or brutality. The Islam that I know and practice is a religion of love, peace and harmony.â€

Regarding the rise of terrorism and extremism in the world, Hazrat Mirza Masroor Ahmad said â€œlet it be clear that if any Muslim conducts a terrorist attack or any other type of atrocity then they are acting completely against Islamâ€™s teachings and seek only to serve their own vested interests.â€

In response to a question about the integration of Muslims in Germany and the West, Hazrat Mirza Masroor Ahmad said â€œin my opinion to go to a nightclub or to abandon your peaceful held religious beliefs is not integration. Rather, I believe that integration is to love your nation, to serve it and to sincerely work towards its progress. Indeed, the Holy Prophet of Islam (peace be upon him) taught that to love oneâ€™s nation is an essential part of the Islamic faith.â€

Huzur also met with Germany politician, Christian Durr who came to attend the Jalsa Salana and to welcome His Holiness to Germany.