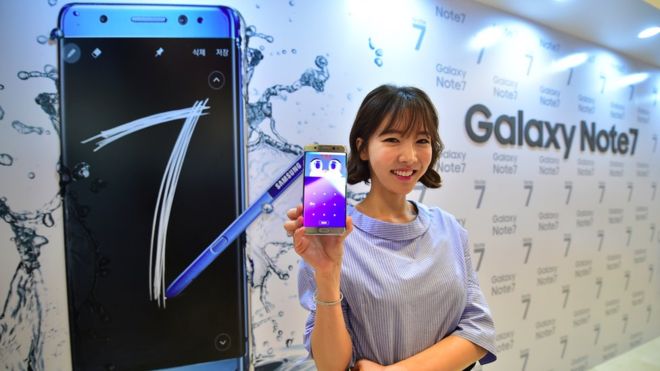 Samsung Electronics is recalling its flagship Galaxy Note 7 smartphone and said that battery problems were behind phones catching fire.

The decision followsÂ reports in the USÂ and South Korea of the phone “exploding” during or after charging.

The South Korean company said customers who had already bought the phone would be able to swapÂ it for a new one.

Samsung said it had been difficult to work out which phones were affected among the 2.5 million Note 7s sold.

“There was a tiny problem in the manufacturing process, so it was very difficult to figure out,” the president of Samsung’s mobile business Koh Dong-jin told reporters.

“It will cost us so much it makes my heart ache. Nevertheless, the reason we made this decision is because what is most important is customer safety,” he said.

The firm said it would take about two weeks to prepare replacement devices.

According to Samsung, the phone has been launched in 10 countries so far but with different companies supplying the batteries.

The recall comes just one week ahead of an expected presentation of a new iPhone model from its main rival Apple.