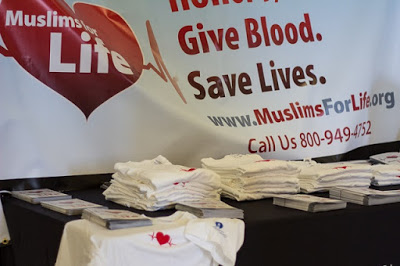 It may sound absurd that it could be difficult to give away food, but thatâ€™s the position the Ahmadiyyah Movement find themselves in going into their second annual food distribution event.

The Allen mosque is once again teaming up with the North Texas Food Bank (NTFB) and the Supplemental Nutrition Assistance Program (SNAP) to give away free produce and other food items from a mobile food pantry from 10 a.m. to noon Saturday, Sept. 10, at 1850 Hedgcoxe Road.

NTFB often partners with churches, businesses or other community organizations to target people in their communities who are in need. Ammar Syed of the Ahmadiyya Muslim Community in Allen said they have worked on various programs with the NTFB over the past several years and jumped on the opportunity to host a mobile food pantry last year to help the needy in the Allen community.

Only problem is, hardly anyone showed up. Syed guessed about four or five families came for food last year. He said having the event on a weekday probably didnâ€™t help with their turnout, so he hopes having it on a Saturday this year will increase the number of people who come out.

â€œThe challenge we are facing â€“ this is an affluent community, especially the west side. The challenge we have is how do we know the people who are in need?â€ Syed said. â€œSometimes you donâ€™t know. It could be your next door neighbor or someone close in the neighborhood that doesnâ€™t have a job and theyâ€™re struggling.â€

The mosque will have enough food to provide for about 100 families, Syed said, with items ranging from potatoes to corn to different kinds of melons. Volunteers from Ahmadiyyah Movement will sort and stack the food and pass it out on Saturday.

The very next day, the mosque will host a blood drive to honor the victims of 9/11, a tradition theyâ€™ve observed annually for several years.

â€œPeople do different things on 9/11. We think that giving blood â€“ you can save peopleâ€™s lives, so I think itâ€™s the best way to commemorate the people who lost their lives,â€ Syed said.

According to the Ahmadiyya Movementâ€™s website islamindallas.org, mosques in the Metroplex have collected enough blood to save approximately 130,000 lives in the years theyâ€™ve hosted blood drives.

No registration is required for either event. Food is available on a first-come, first-serve basis.