UK: The Jamia Islamia Ghousia Trust of Luton â€“ An Extremist Mosque in the Mainstream 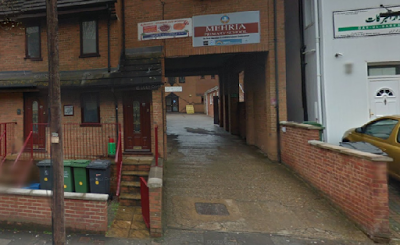 UK: The Jamia Islamia Ghousia Trust of Luton â€“ An Extremist Mosque in the Mainstream

The Jamia Islamia Ghousia Trust of Luton would like people to think it runs a wonderful mosque.

Fools and scoundrels will tell you that it most certainly does.

The reality is rather different.

The father and son are keen supporters of religious murder. For them, Mumtaz Qadri, the fanatic who murdered Pakistani politician Salman Taseer in 2011, is a hero and a martyr. Taseer was a bit soft on persecuted religious minorities, you see. This just wonâ€™t do. Not at all. Death.

A Telling Rally
Saturdayâ€™s visit is no surprise. One can see this in a telling rally held at the mosque last year.

Khatme Nubuwwat is a Pakistani movement dedicated to stirring up vicious hatred of Ahmadi Muslims. It should be driven out of this country, especially after the murder of Asad Shah in Glasgow.

The Jamia Islamia mosque would rather host its rallies. (Click the image to enlarge.)

Note that the poster shows Muhammad Hassan Haseeb ur Rehman, who is evidently popular at the mosque.

Heâ€™s a natural for this nasty work.

Consider a sinister image posted this summer on the Facebook account of Eidgah Sharif, the shrine his family runs in Rawalpindi. The man on the left is Mirza Ghulam Ahmad, the founder of the Ahmadiyya movement. On the right is an alleged image of one of the Pharaohs. The image says that Mirza falsely claimed to be a prophet while Pharaoh falsely claimed to be God. The caption at the bottom says the poster swears by God that he hates these â€œGustakh e Rasoolsâ€ â€“ those who disrespect the prophet. In these dark times Gustakh e Rasool is a term best read as incitement to hatred, including violence.

Another Pakistani preacher featured at this conference is Hanif Qureshi. He is a strong supporter of Mumtaz Qadri. This is the least he could do â€“ he inspired the murderer. Labour MP Siobhain McDonagh, who has done a lot of good work to help Ahmadis, has Mr Qureshiâ€™s number. Here she is speaking in Parliament:

Mufti Hanif Qureshi is an individual who is greatly responsible for spreading messages of hate. He is the founder of Shabab e Islami, and is well known in Pakistan for his virulent anti-Ahmadi preaching, of the sort that inspired the murder of Mr Shah. For instance, in a recording of a sermon Qureshi delivered in 2014, which is freely available on YouTube, he said with regard to Ahmadi Muslims:

â€œLet them know those who consider Sunnis as cowards that Allah has honoured us with the courage and power to strangulate those involved in blasphemy, to cut out their tongues, and to riddle their bodies with bullets. For this, nobody can arrest us under any lawâ€.

Such highly inflammatory and hateful sermons have indeed incited others to commit violence and murder. In 2011, Pakistani politician Salmaan Taseer, who opposed Pakistanâ€™s anti-Ahmadi laws, was shot dead by his bodyguard, Mumtaz Qadri. After his arrest, Qadri said he had been inspired to act by a 2010 sermon delivered by Qureshi in Rawalpindi, in which the cleric branded the likes of Taseer as â€œdeserving to be killedâ€ under Islamic law.

Note that Mr Qureshi was no chance visitor at the Luton mosque. Like the Ur Rehmans, he is very welcome and popular. He has spoken there six times since 2014.

The mosque was challenged about his visit in May 2016. Abdul Aziz Chishti, the mosqueâ€™s founder, managing trustee, and senior imam was having none of it:

â€œLet me make it very clear to you that he has changed his views, and his speech was very, very impressive last night [4 May], and he made very clear that he believes that Islam is a religion of love and peace and harmony. Anyone who is killing innocent people is nothing to do with Islam,â€ said Mr Chishti.

Now if you look at Mr Qureshiâ€™s Facebook account, you will see that he has renounced his â€œhardline viewsâ€ by putting a picture of Mumtaz Qadri at the top of his profile.

On March 1, just after Qadri was executed, Mr Qureshi solemnly posted pictures of himself weeping over Qadri at his funeral.

Jilani praised Qadri and led prayers for him after he was executed.

Oh, by the way, the mosque itself supports Qadri. When he was executed it hailed him as a â€œshaheedâ€ (martyr).

Here is a poster for another Khatme event at the mosque. This is a pattern, not an anomaly.

Mainstream Support
This is England, so a nasty mosque can be reasonably confident it will be supported by mainstream figures.

Sure enough, its accounts filed with the Charity Commission show â€œlocal authority grantsâ€ of Â£125,031 in the financial year 2015. Over the last five years the grants totalled Â£473,827.

Local Labour MP Gavin Shuker is certainly keen. Here he is (the man in the red tie) two weeks ago at a celebration of Pakistanâ€™s independence day. The event was totally segregated â€“ only men were present in the main hall.

Here Mr Shuker hosts mosque leader Abdul Aziz Chishti in Parliament at an event in 2015 â€œheld in honour and remembrance of our Beloved Prophetâ€.

Shuker even attended one of the mosque events where Hanif Qureshi spoke. Must be inclusive, eh.

Labour MEP Richard Howitt has visited to learn about â€œeducation & cultural activities for the communityâ€.

â€œInterfaithâ€ leaders in the area cherish close relationships with extremist mosques. The Ghousia mosque is no exception.

In 2013, for example, the Bishop of Bedford was among guests at the mosque to â€œshare the joy of Eid-ul-Fitrâ€.

Some people are still surprised that the UK has so many problems with Islamic extremism. Or so they say. Hey ho.