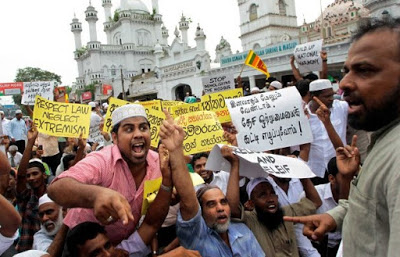 The failure by the Wakf board which comes under the Department of Muslim Religious Cultural Affairsâ€™ (MRCA) to act independently without any interference from higher ranking officials of the Ministry has resulted in the appointment of unfit persons to the department Â which led to alleged corruption within the ministry.

Although the present Wakf board that appoints trustees follows certain ways of appointing trustees to Jamath mosques and Shrine mosques, it was alleged that under the instruction of the ministry secretary there were attempts to appoint Jamath persons to one of the shrine mosques which would trigger controversial problems within the mosques.

The Chairman of Islamic Solidarity Front (ISF) Reyyaz Salley said that certain mosques do not come under the Jamath sector and therefore, trustees were appointed accordingly to manage the mosques they belong to, but the Wakf Board acts according to the instructions given by the ministry secretary in appointing the trustees to certain mosques in Colombo. Had not the director of the MRCA Zameel interferred with the Wakf Board, problems that were being raised in the board would have been prevented.

According to the Wakf regulations, no change can be made in the management of the mosques when there is a pending case against it, but Mr. Fahim is alleged to have been making attempts to remove the present trustee board from the Dewatagaha mosque due to political vengeance, even though there is a case pending against it at the Wakf tribunal that deals with complaints regarding appointments of trustees.

It is the duty of the Wakf board to appoint suitable trustees to the mosques island wide and to hold inquiries when an issue is raised up but, since they have failed to fulfill their duties the cases were filed at the tribunal which is already filled with pending cases. Salley said it was the obvious failure of the Chairman Mr. Yaseen and the director of the Wakf board who are ignorant of holding inquiries into the issues being raised up.

Moreover, a female trustee is not usually appointed to look into the mosque affairs whereas the former trustee of Daftar Jailani was given to a female who was the daughter of a former Cabinet Minister. She was appointed by the previous chairman of the Wakf Board Alkam Uwais. Politics should be set aside from being involved into religious affairs, said Salley. It is noteworthy, that it is one of the mosques in the country where a lot of charity funds come in. In the meantime, a new set of trustees were appointed to the Daftar Jailani mosque for six months and the period is being extended for one year as the previous trustees have not furnished any documentation on any accounts.

It was alleged that the director refused to hand over the appointment letter as the former female trustee of the mosque had allegedly requested the Minister and the Director not to give them the extension order. Meanwhile, even though the new set of trustees have written to the banks informing them of the change of trustees and the cheque books, the former female trustee had withdrawn about 15,000LKR through the previous cheque book of the mosque. Following the incident the bank attempted to compensate with the new trustees, but had been stopped.

â€œWhen she was the trustee audits were not done for ages and these are the people the minister and the director are trying to bring back, it is disheartening to note that the government officials of respective government have so far failed to implement the regulations and appoint people who are fit for the positions,â€ claimed Salley.

In addition, although the Wakf Board has no right to appoint Interim trustees to mosques, a group of 7 interim trustees were appointed to Dewatagaha mosque based on the instructions of the ministerâ€™s secretary without the knowledge of the previous trustees, who were functioning as persons-in-charge of the mosque.

The persons-in-charge of the mosque sent letters to the director, chairman and the members of the Wakf board regarding the illegal appointment order but,they have failed to hold an inquiry into it and hence the case was filed at the Wakf tribunal.

As regards the appointment of the interim trustees, it was confirmed that the Wakf board has acted contrary to the provisions of the Muslim mosques and charitable trusts of Wakf acts No.51 of 1956 as amended thereafter. There is no provision in the said act that gives right to the Wakf board to appoint interim trustees. The chairman of the tribunal said the process by the director of MRCA should be set aside and trustees to the Dewatagaha mosque should be appointed according to the Wakf act.

Salley further stated that the director who was confirmed to be involved in such a fraudulent act should have resigned by now whereas he still holds the position. â€œI appeal to the president that the irresponsible officials should be replaced by officials who will serve the purposes,â€ Salley added.

However, there are a number of issues in the department and the Wakf board which are yet to be addressed by the responsible officers. Recently, one of the Wakf Board members resigned as permission for a new mosque to be formed was refused by the board, and is being blocked from being re-appointed as the secretary to the minister is allegedly involved in it to appoint someone from his village.

Meanwhile, the resigned Wakf board member was one of the nominees of the UNP MP for Colombo District Mujibur Rahman,and has more experience than the other members and had served as an acting chairman of the board. Even though the minister promised to re-appoint the member he is yet to be appointed as 5 months have already been passed. Therefore people who are capable of handling the positions should be given the due posts in the board and the department. â€œPeople who are Â fit for the positions are removed,â€ Salley stressed.

Nevertheless, the minister Haleem was appointed in the expectation to organise Â proper management and to look into the issues within the community, but it seems that the expectations as well as the duties of a minister are being ignored as he turns a blind eye to the corruption taking place within the ministry. It is his duty to stop all these law violations and serve the people but when that does not happen, the community is in need of a minister who is capable enough to handle the issues and to maintain a clean management, Salley claimed.

â€œI am a private secretary to the Minister and I have no hand interfering with the Wakf Board in appointing trustees to mosques island-wide, these allegations are baseless. I do only what the Minister tells me to and am not entitled to interfere with the Wakf Board nor do I dictate to the members what to do and who should be appointedâ€, said Fahim.

He also claimed that four of the board members are lawyers and they do not let anyone to interfere with their activities.

The chairman of Wakf Board Yaseen also said that he completely denies the allegations as they do not take orders from the Private secretary to the Minister.