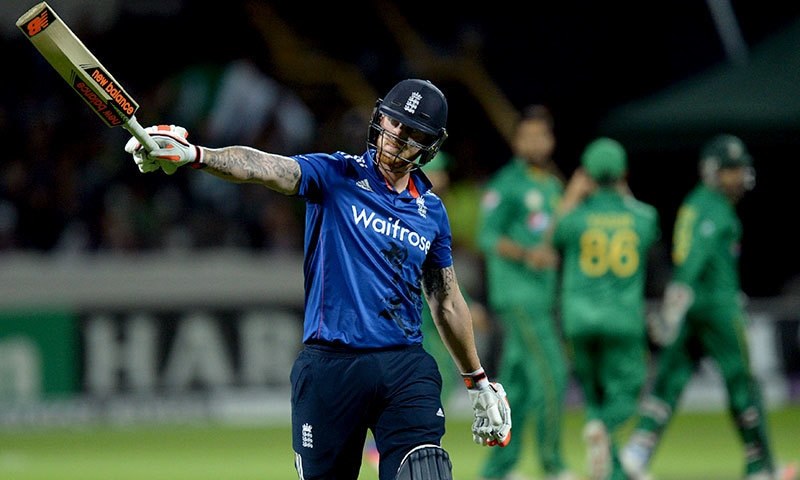 England on Thursday beat Pakistan by four wickets to go 4-0 up in the five-match One-Day International (ODI) series at Headingly, Leeds.

With just 12 required of the last three overs, Moeen Ali charged down the wicket twice in span of five balls during Pakistan captain Azhar Ali’s over to smoke him for two towering sixes â€” the last one sealing the game.

However, what relieved the Pakistan fans was watching England work for the victory, in contrast to the previous three encounters, as Pakistan pacers reduced the hosts to 72 for four in 15 overs.

Returning to ODI cricket after a hiatus of eight months, Mohammad Irfan drew first blood on the 17th ball of England innings when his good-length delivery took a thick edge of Jason Roy’s bat to be caught by Mohammad Rizwan, positioned at second slip.

Roy, who had struck Irfan for two back to back boundaries before falling, made 14 off 11 balls with three fours.

Two overs later, the Gentle Giant struck again as Alex Hales, who spanked a mighty-171 in the last ODI to seal the five match series for England, was removed with an immaculate good-length delivery that moved a fraction away.

The left-armer’s thunderbolt kissed Hales’ blade on its way to Sarfraz Ahmed’s gloves. He could have done more damage to the England side, but Irfan’s hamstring injury reduced him only to his first spell of five overs that bagged him two wickets at 12.5 apiece.

Speaking at the post-match ceremony, Pakistan captain while complimenting Irfan for his outstanding exploits with the new ball admitted that his side would have “loved to see him bowl in the second and third spells”.

Eyeing sixth consecutive fifty plus score in the ODI cricket, Joe Root got off to a thumping start as his sublime backfoot cut travelled to third-man boundary off the dangerous-looking Irfan’s back-of-the-lenght delivery.

However, he fell 20 runs short of the record fifty when he top-edged Hasan Ali’s good-length delivery into fine-leg’s hands leaving England struggling at three for 59 in 11.2 overs.

Needing 176 in 213 balls, England desperately needed a partnership and their middle-order batters Ben Stokes and Jonny Bairstow stepped up to the task.

A 103-run stand between Stokes and Bairstow fought their team’s way back into the match as the two toiled with Pakistan spinners. The partnership, however, got dismantled when Stokes (69 off 70) failed to clear Yasir Shah, stationed at cow corner, off Imad Wasim.

With still 73 required of the last 15 overs, Bairstow, rested for the first three ODIs against Pakistan, took the reins from the left-handed batsman and continued with a stiff resistance along with Ali, who had taken two wickets earlier in the day.

The wicketkeeper batsman, who replaced Jos Buttler, went on to score his third ODI fifty. After that it was just a walk in the park for England.

Bairstow, who bagged man-of-the-match for his 83-ball 61, struck five boundaries â€” four fours and a six.

Coming into bat when the tourists were six down for 169, Imad hit eight boundaries â€” seven fours and a six â€” all coming against the pacers.

70 runs came off the last 10 overs as a 56-run eighth wicket stand between Imad, who is yet to be dismissed in the series, and Ali kept Pakistan afloat.

Pakistan captain, the highest scorer of the match, was caught by David Willey in the 38th over when he attempted to clear long-off boundary off Adil Rashid’s bowling.

He scored a painstaking 80 out of 104 balls, which included five fours and two massive sixes, to give Pakistan a much-needed big score early on.

Pakistan were 169 for six after Azhar, who saw four wickets tumble, fell.

Mohammad Nawaz followed his skipper two overs later when he walked down the wicket only to be deceived by Moeen Ali’s off-spin to be stumped.

Mohammad Rizwan, playing his first ODI in England, was trapped LBW in the 34th over by Rashid, the pick of the bowlers with his three for 47 in 10 overs.

Four overs ago, Pakistan had lost their crucial fourth wicket in Sarfraz Ahmed, who replaced Babar Azam after he Rashid into Liam Plunkett’s hand at backward-point, after Azhar registered his ninth ODI fifty.

The wicketkeeper batsman handed Liam Plunkett, at mid-on, a catch off Rashid after scoring just 12 off 23 balls.

The visitors lost their first wicket early on when Sharjeel Khan, who scored 16 off 12, fell on the last ball of the fourth over off Chris Jordan’s full-length delivery.

Trying to muscle Jordan over cover boundary, the left-hander lifted the ball as he played a half-hearted shot. Stokes, who remained brilliant in the field, ran back to capture the ball safely.

Ten overs later, his opening partner Sami Aslam made his way back to the pavilion as he was dismissed for 24 off 44 ball by Liam Plunkett.

Pakistan elected to bat first after winning the toss.

After being clubbed for a record 444 runs in the last ODI, Pakistan made four changes in their line-up.

England captain made three changes in his playing XI as Jonny Bairstow, David Willy, and Jordan came in for Jos Buttler, Chris Woakes, and Mark Wood.

Pitch and weather report: It was another dry wicket on the offering for the two sides. The pitch was deemed as a pristine batting surface by David Lloyd. The sun basked throughout the day and skies were clear in the evening.