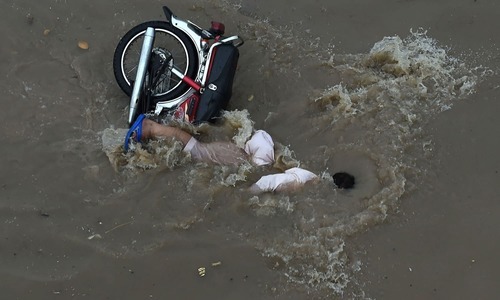 LAHORE: Downpour in different areas on Saturday inundated roads and streets in the provincial capital of Lahore and commuters faced immense difficulties while trying to carry on with their routines.

Traffic flow was affected on Jail Road leading up to Mall Road as motorcyclists parked under an overhead bridge blocking the traffic.

Meteorological Department has stated that the spell would continue for three more days.

It should be mentioned here that around two lives were lost in different rain-related accidents in Lahore involving short circuit and electrocution in this season.

The department stated that heavyfall is expected at isolated places in Punjab, Khyber Pakhtunkhwa, Sindh and Kashmir and in areas of FATA, Gilgit- Baltistan and Balochistan.