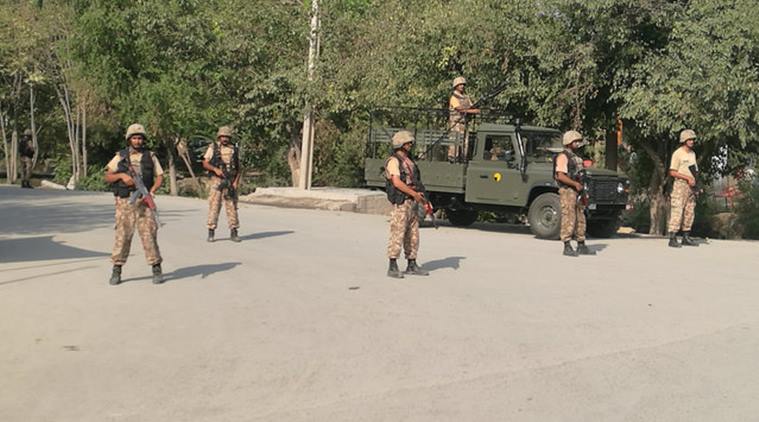 PESHAWAR: Four terrorists trying to attack a Christian colony on Peshawar’s outskirts were killed during a stand-off with security forces Friday morning.

A civilian was also killed in the attack, security sources told DawnNews.

The Jamaatul Ahrar militant group claimed responsibility for the attack.

Soldiers backed by Army helicopters exchanged gunfire with militants in suicide vests who entered the colony around 6am after hitting a security guard, Inter-Services Public Relations (ISPR) said.

Two Frontier Corps soldiers, a police constable and two civilian guards were injured during an exchange of fire with terrorists, ISPR said.

Two of the terrorists took cover in under construction houses, one hid inside a house, and one was found outside in the colony, the AIG said.

The AIG termed the colony clear after a house-to-house search operation was carried out.

Peshawar has suffered numerous terrorist attacks but it was not immediately clear who was behind todayâ€™s assault. The city suffered its worst terror attack in December 2014 when Taliban gunmen massacred more than 150 people, most of them children, at an army-run school.

But recently there had been a lull in violence. The last deadly attack in the city came in March this year when a bomb ripped through a bus carrying government employees, killing 15.

Christian Colony is situated on the outskirts of Peshawar near the borders of Khyber Agency and Mohmand Agency. Situated close by are an FC training centre, a cadet college, and an Army Public School.

These installations were initially the target of the attack, security agency sources told DawnNews, but since security forces had already received intelligence and were alert to the threat, the terrorists moved in to attack the Christian Colony instead, they said.

The area, which is situated near the Pak-Afghan border, is susceptible to cross-border movement of terrorists. Tehreek-i-Taliban splinter group Jamaatul Ahrar has a presence in the area, the sources said.

The attack on Christian Colony comes barely a day after Director-General (DG) Inter-Services Public Relations (ISPR) Asim Bajwa gave an exhaustive rundown of progress made against militants in the country’s northwestern region in Operation Zarb-i-Azb which was launched in June 2014.

He highlighted that Pakistan had suffered a cumulative loss of $106.98 billion in the war on terror between 2001 and 2015. â€œWe are not doing it for anyone but ourselves,â€ he stressed.

He said 3,500 terrorists had been eliminated during the course of Operation Zarb-i-Azb, while 2,272 soldiers were and 537 personnel had embraced martyrdom, including 18 officers, 35 junior commissioned officers and 484 soldiers.