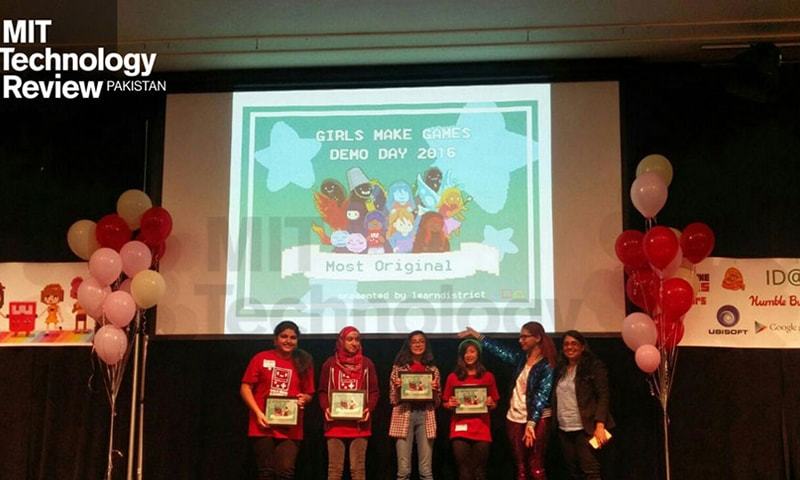 CALIFORNIA: Girls make Games is an all-girl led collective headquartered in San Jose, California, that aims to educate, inspire and teach a new generation of girls on how to make a place for themselves in this ever expanding industry.

A CNNMoney report in 2015 listed ‘Video Game Designer’ as one of the best and fastest growing jobs for the next decade.

However, the gaming industry is male-dominated, from the development of the video games to those who play them. Even today, the stereotype of a gamer remains that of a young, acne-ridden male.

This bro-culture of gaming is under threat.

It aims to increase gender diversity in the male dominated gaming industry especially in the wake of the ‘Gamergate’ controversy which led to female gamers being harassed online.

The three-week camp takes place across nine cities of the United States and has educated more than 800 girls since it began in 2014.

This yearâ€™s batch includes Fatima Naweed, a 16-year-old Pakistani who made the journey all the way from here just for the camp.

Speaking exclusively to MIT tech, Naweed says, â€œWhile the camp was very diverse, with students from India, China and Pakistan, they were all living in the US â€“ I was the only one who came from abroad.â€

The camp provides an introduction to game design, game art and programming. Campers learn gameplay models and terminology, and create characters and backgrounds using Photoshop. There are also guest talks from industry experts.

Participants at the camp get tours of the work space and labs at Google and Xbox, and are provided with contact information of industry professionals in case they came up with new games.

At the end of the camp, there is a demo day where the top 5 teams showcase their video games in front of industry expert judges. The winners of the 2014 demo day went on to launch their Kickstarter campaign and publish their video game “The Hole Story.”

According to estimates from PricewaterhouseCoopers, video game design is a massive global industry that will be worth $90 billion by the year 2020.

The gaming industry in Pakistan is small and mainly driven by studios like Mindstorm Studios, Caramel Tech and we.R.play, however, the local industry has received certain levels of recognition and success.

â€œFruit Ninjaâ€ which Caremel Tech worked on has had more than 500 million downloads. Mindstorm Studios’ â€œWhacksy Taxiâ€ was a top app on App Store in over 25 countries and â€œCricket Powerâ€ became the official ICC Cricket World Cup 2011 game.

Gaming is an industry that has always been dominated by men both domestically and internationally. According to the Girls Make Games website, 47 per cent of gamers are women but they make up less than 12% of the game industry.

An article in the Washington Post stated that there were 30 million males and 18m females who played games on Sony and Microsoft’s consoles in 2011 but in 2014, the number of female gamers grew rapidly to 30.3mwhile the number of male gamers only increased to 43.3m.

So a growing number of women are now playing games but the games that they are playing are still mostly made by men.

“A lot of girls donâ€™t code or game in Pakistan. I didnâ€™t even know that there was a future in gaming before this,” said Fatima Naweed, who is now spending her second summer at the camp.

After attending Girls Make Games, Fatima Naweed and her team called “The Indefinites” won an award for the Most Original Game Idea at Demo Day 2016 for their game “Umbra” and are now developing the game on their own.

Developers have begun to understand the importance of having a more inclusive workplace in the gaming industry and there are concerted efforts to get girls involved.

A more diverse workforce in gaming has the potential to lead to better idea generation and target a new segment of the audience in the massive billion dollar industry.

This piece first appeared on MIT Technology Review Pakistan and has been reproduced with permission.