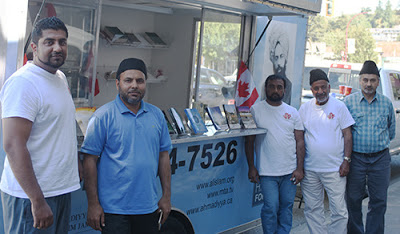 A nationwide tour aiming to combat Islamophobia with education and discussion stopped in Abbotsford on Thursday.

The travelling exhibition was presented by members of the Ahmadiyya Muslim Jama’at community, most of whom live in the Greater Toronto area.

Abbotsford was the 22nd stop on the 25-town Mobile Muslim tour, which began in St. John’s, Newfoundland, on July 13.

The group parked a trailer downtown on Essendene Avenue and stood on the sidewalk, engaging the public and handing out literature about their faith.

One member of the group from Edmonton, who studies in Toronto, held a large sign which read, “I am a Muslim, ask me anything.”

The young man, who asked not to be named, engaged in a lively discussion about religion with local Christians.

Omer Ahmed, a banker from Ancaster, Ont., said all questions were welcome, with nothing off limits.

The group has fielded a great variety of questions, Ahmed said, some more benign than others. He said he has been asked about their Halal diet, which disallows pork and requires meat to be slaughtered and prepared in a specific way.

Ahmed has also explained to Canadians how he fits five daily prayers into his schedule.

The group has also been asked if they, and all Muslims, are supporters of the violent extremist group ISIS. He said the question came from someone who genuinely believed that all followers of Islam might support terrorism.

“ISIS is hijacking my faith,” said Ahmed, who said he was not bothered by the question and was happy to be able to dispel the misconception. “We want people to get to know the real Islam, not just those who hijack it.”

He said the group had spoken to several dozen locals, and other than some rude comments by people driving by, everyone was happy to see them and appreciative of their presence. Ahmed said one woman even left to fetch friends and return for a discussion.

He said it was particularly important to him and the group to reach people in less metropolitan places like Abbotsford, where people are less likely to have Muslim neighbours, friends and coworkers.

“We are just normal humans,” he said.

Ahmed estimated encountering 5,000 people across the country. Of those, only five or six were outright negative experiences, he said.

The Mobile Muslim tour had an additional goal to public outreach and education, spelled out on the backs of their T-shirts: “Thank you, Canada.”

Ahmed said loyalty to country is important in Islam and he is very grateful to express himself in a country with religious freedom.

For Ahmed, this is a freedom not available to him in his native Pakistan, where practitioners of the Ahmadiyya sect of Islam are often excluded and persecuted. He said he may even be killed for following the revivalist Islamic practice founded in Punjab, India in the late 1900s.

The group wrapped up its tour in Vancouver on Aug. 21, after stops in Delta and Victoria.