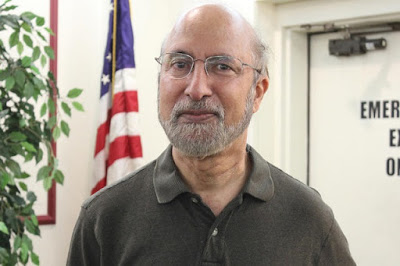 “The people who don’t know Muslims, they are afraid of them,” said Syed Sajid Ahmad, a researcher at NDSU, while presenting a national campaign to educate Muslims and non-Muslims on True Islam to the Detroit Lakes Kiwanis Tuesday afternoon.

“Concerning war, there is a study. That study shows that if a soldier could see the other soldier, he was reluctant to pull the trigger,” Ahmad said, “but if the other soldiers were far away, and he could not see his face, then he pulled the trigger.”

Ahmad continued, saying it is the same in society: “The people who knew us (before 9/11), they know who we are and who we are not.”

Ahmad said that 9/11 was a turning point when the lack of education surrounding Islam turned into fear.

Ahmad spoke, campaigning for True Islam, inviting people to understand the religion, rather than fear it.

He spoke of the Ahmadiyyas denomination of Islam, which he is a part of, and how they are combating terrorism by helping people understand the religion.

“The Ahmadiyya community is the only community, which has organization–international organization–and it has one leader, which directs its activities all over the world,” Ahmad said. “Our community is more than 200 countries..we have national officers…hold annual meetings…no other Islamic community does that…the other Muslims, they are split between countries, between cities, between towns.” Ahmad stressed that the Sunnis and Shi’ite denominations of Islam, while they are larger sects, they “don’t have the unity” or leadership to control terrorism.

“To conquer the current spat of radicalization in the world, we have started some campaigns, and those campaigns address the problems which some of the Muslims have,” Ahmad said.

“Muslims for Loyalty” is a campaign throughout the Islam religion, which teaches that “whatever country you live in, you have to be loyal to that country,” Ahmad said, seguaying into the next campaign: “Muslims for Peace.”

“Muslims for Peace” teaches that “Islam does not allow killing anybody or causing trouble in the land,” Ahmad said.

Next, Ahmad spoke of the campaign “Muslims for Life,” which began after 9/11.

“Every 9/11 we collect blood for life to give life to people,” Ahmad said, adding that Rep. Keith Ellison participates in the blood drive every year, which begins in Minnesota and is held all over the country “to show that we care for life and life is precious, and we have to save lives rather than take lives.”

Finally, Ahmed spoke of the “True Islam” campaign, which has 11 points, the first one being a rejection of any form of terrorism.

“These 11 points define the True Islam. If anybody differs from them, it means he does not understand Islam properly,” Ahmed said.

Ahmed stressed that these campaigns are a way for Muslims and non-Muslims to “take responsibility for what is happening.”

“We have to make the people understand that this is right, this is wrong. And what is wrong, we have to point it out clearly, and that is the mission,” Ahmad said, adding that this is a mission the Ahmadiyyas have been on for the last 100 years, since they began teaching about Islam in Minnesota.

“The Quran forbids man to commit suicide,” Ahmad said, when questioned why certain sects of Islam participate in suicide bombing.

Ahmad said the suicide bombings are not justified by the Islamic religion, and those terroristic acts are politically-based, rather than religion-based. “It goes back to politics. Like many organizations, they try to commit certain things to bring their cause to the attention of people,” Ahmad said, mentioning the recent highway protests that took place in Minneapolis after Philando Castile was fatally shot. “They blocked the highway in Minneapolis…now what about somebody going to hospital? You block all those people, and you make people suffer. They wanted to do a wrong thing for the right cause.”

“In our community we tell our member that we are not allowed to go and strike,” Ahmad said.

Instead, the Ahmadiyyas focus on their mission: educating others about True Islam to eliminate uninformed fear surrounding the religion.