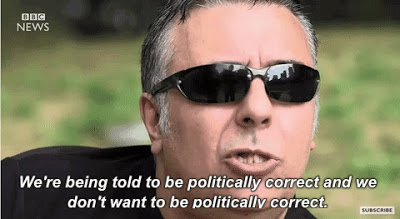 A reporter talking to a student about anti-Muslim rhetoric was interrupted by a passerby making Islamophobic comments.

For a BBC segment on Islamophobia on social media, reporter Catrin Nye was discussing with student Ruqaiya Haris, 23, the almost 7,000 anti-Islamic tweetsthat were sent worldwide every day this past July.

A spike in the hate tweets happened immediately after last monthâ€™s terror attack in Nice, France.

Nye was interviewing Haris in London for BBC Twoâ€™s â€œVictoria Derbyshireâ€ show Thursday. During the conversation, a manâ€™s voice can be heard off camera saying,â€œThereâ€™s no Sharia law here yet!â€ Buzzfeed reported.

The man, who identified himself to the crew only as Paul, was sitting beside the reporter, student and crew during the recording. They had â€œasked him to keep his voice down and he replied saying he had a right to freedom of speech.â€ But he kept making comments, which led to his outburst about Sharia law.

Haris, incensed by the manâ€™s outburst, responds with a question:

Haris follows up with, â€œWho were you talking to about Sharia law here, sir?â€

After an altercation where the man says he feels that heâ€™s â€œlosing his freedom of expressionâ€ and Haris says that she doesnâ€™t want Sharia law, the man ultimately admitted that he didnâ€™t actually know that much about Islam and Muslims.

The man also said that he doesnâ€™t look at Islam as a religion, but rather an ideology.

According to CNN, for Muslims, Shariah law is â€œthe principle of treating other people justly, of making sure that the financial system treats people fairly … and most importantly the basic principles of Islamic fate.â€ It encompasses things like marriage, divorce, inheritance and punishments for criminal offenses. Sharia law is not implemented in any country in the world and is up to the interpretation of those practicing.

After Paul left, Haris said she found it sad that Islamophobia is so normalized. She also said that she finds it worthwhile to engage with individuals who behave like he did because it can be used as a learning experience for them.