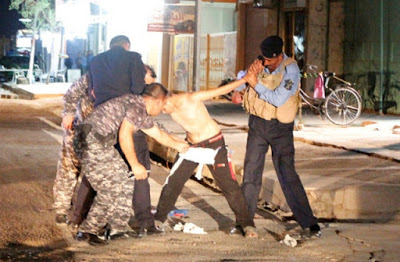 A study in February for Combating Terrorism Center at West Point military academy that examined Islamic State propaganda on child and youth â€˜martyrsâ€™ between January 2015 and 2016, found three times as many suicide operations involving children over the year.

Those tactics are mirrored in West Africa where U.N. officials have tracked a rise in attacks like the one carried out by a girl as young as ten who last year exploded a bomb in a busy market-place in the Nigerian city of Maiduguri, killing 16 people.

Security sources at the time said the explosive device was wrapped around her body.

In an April report, UNICEF said attacks involving child suicide bombers between 2014 and this year rose four-fold in northeastern Nigeria, where militant group Boko Haram is based, and neighboring Cameroon, Niger and Chad.

A 12-year-old Nigerian girl captured with explosives in Cameroon in March told police she had been abducted by Boko Haram after the group overran her village a year earlier.

According to the UNICEF report, nearly two thirds of all the child attackers they tracked were girls. In the first six months of this year alone, UNICEF says it has also noted 38 child suicide bombers in West Africa.

â€œThis is one of the defining features of this conflict,â€ said Thierry Delvigne-Jean of the agencyâ€™s west and central Africa office.
…
Hisham al-Hashimi, an analyst and author who advises the Iraqi government on Islamic State, says militants this year had reactivated their Heavenâ€™s Youth Brigade, in reaction to the groupâ€™s battlefield losses in Iraq and Syria.

â€œTeenagers are easier to recruit for suicide missions, especially in moments of suffering or despair having lost loved ones,â€ he said. â€œThey also attract less attention and less suspicion than male adults.â€

Child recruits who have escaped from Islamic State ranks in its base in Syriaâ€™s Raqaa have described how they were taught to handle weapons, and also how to detonate suicide belts.