In the leafy Hampshire countryside, more than 30,000 members of the Ahmadiyya Muslim community have gathered for the 50th anniversary of the Jalsa Salana.

An annual convention attracting visitors from more than 100 countries, united in their creed, the Jalsa Salana is a religious festival celebrating the Ahmadis’ peaceful reading of Islam.

Over three days, the community takes the opportunity to meet fellow believers that have come from around the world.

They eat together, pray together and hear speeches from community leaders. Pop-up exhibitions are also set up at the 200-acre site on Oaklands Farm near Alton.

Ahmadis are an international sect of Muslims that believe in reviving what they believe to be the “true” version of Islam – one centred on peace, tolerance, and integration. 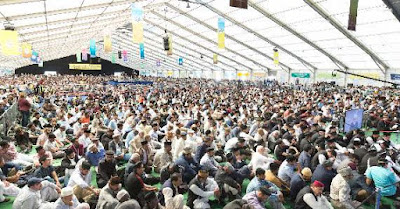 Founded in 1889 in what was then British India, they have lived a life of persecution, particularly in Asia and across the Middle East.

Discrimination against the people stems from their belief that their founder, Mirza Ghulam Ahmad, was the promised Messiah after Muhammad – a claim that is rejected by other sects of Islam, many of whom who go so far as to declare Ahmadis non-Muslim.

Much of the culture of persecution against Ahmadis has stemmed from Pakistan, where the community has been officially outlawed.

To be issued a passport in Pakistan one must sign a document stating that Ahmadis are not Muslim.

Ordnance XX, legislation passed in 1984, states: “Any person of the Qadiani group who directly or indirectly, poses himself as a Muslim… shall be punished with imprisonment of either description for a term which may extend to three years and shall also be liable to fine.” Qadiani is a derogatory term for Ahmadis.

“Some of the reasons for discrimination can be political or a person might hold a grudge against someone,” says Jamal Akbar, a London-based IT consultant volunteering at the Jalsa.

“But they’ll use the Ahmadi card to get revenge on that person, attack them or kill them.”

“It’s hugely toxic,” says Zaki Ahmad, an expert on Ahmadi human rights in Pakistan who is running an exhibition at the Jalsa Salana.

He tells us that high illiteracy rates, particularly in Pakistan, allow this anti-Ahmadi narrative to go unchallenged. “It’s manipulation on a wide scale.”

Across the Arabic-speaking world, there is no official legislation attacking the community. However, the discrimination against them spills over borders and affects Ahmadis living in other countries.

Despite this, they are not interested in interfering with politics. So much so that they refuse to even stand up against a government that oppresses them. This is reflected in their non-participation in the transnational Arab Spring uprisings.

“When the Arab Spring started, the head of the community said that the behaviour of the Ahmadi Muslims should be that they obey an established government,” explains Ahmed Ahmad, a Syrian refugee who fled the country with his brother in 2014.

This is their first Jalsa Salana. “We fled Syria for two reasons. Of course when there is a civil war going on you have to leave to survive. But the other equally important reason was because there was no life there any more for the Ahmadis.”

For Ahmad and his brother, opposing the regime was never an option. “I can say Ahmadis are very obedient,” he explains. “Being disloyal has nothing to do with Islam, which teaches us to be loyal to the country where we live.”

Muhammad Ibrahim Ikhlaf, of the Ahmadiyya Muslim Students Association (AMSA), goes further in his explanation of how the teachings of the community promote peace, non-violence and pacifism.

“Islamic injunction teaches us that whatever your leader is – whether an oppressor or tyrant – you should obey them. This is our duty,” he says. “In order to prevent chaos and anarchy in society our duty is to pray and advise but we cannot be rebellious.”

When loving your country is a basic element of Islam, how can any true Muslim exhibit disloyalty or betray his nation and thereby forgo his faith?
– Mirza Masroor Ahmad

In this sense, Ibrahim is underpinning the Ahmadi commitment to a secular society, in which religion and politics co-exist in separate spheres.

In the words of the community’s current caliph, Mirza Masroor Ahmad: “When loving your country is a basic element of Islam, how can any true Muslim exhibit disloyalty or betray his nation and thereby forgo his faith?”

As well as explaining the community’s absence from the Arab Spring, this is yet a further example of their peaceful reading of Islam.

“You could call this a separation of mosque and state,” says Farhad Ahmad, a British Imam of the Ahmadiyya community, present at the Jalsa.

This secular notion clearly contrasts with the current political landscape of the Middle East, which is often defined by religion and sectarianism.

The two regional superpowers, Iran and Saudi Arabia, are primary examples of the marriage between religion and politics.

Yet, even though the Ahamdis believe in a secular society, they are not shy of spreading their faith. In fact, the community’s international television channel known as MTA – Muslim Television Ahmadiyya – is symbolic of this.

With four satellite channels beamed around the world, spreading the Ahmadi message of Islam, one of the channel’s presenters explained how “vital” the network has been in converting Arab Muslims.

“When MTA started, the people were introduced to the Ahmadiyya community,” says Tamim Abu Daqqa, a theologian from Jordan who features regularly on MTA3.

As often as once a month, Abu Daqqa travels to the UK-based studio to preach about the Ahmadiyya community on air.

Every day we are receiving more and more converts through MTA. They are attracted to Ahmadiyya because we are presenting Islam in a very nice way
– Tamim Abu Daqqa

“Since we launched the Arabic channel in 2007 we have had thousands of people converting in Arab countries,” he says.

“Every day we are receiving more and more converts through MTA. They are attracted to Ahmadiyya because we are presenting Islam in a very nice way.”

Beyond presenting Islam in a good light, Ahmadis seek to actively contribute to humanitarian efforts around the world.

Through missionaries and its main charity, Humanity First, they aim to improve impoverished communities by providing services and building infrastructure.

“In Pakistan, for example, when the earthquake happened we set up a camp, we set up marquees and we were providing hot food and shelter to the people there,” Hanif Shakir, head of operations at Humanity First, told The New Arab.

He is standing next to a model of a water well, which he uses to demonstrate as an example of the work they do. “We aim to win hearts, not territories.”

The Jalsa Salana itself is a hefty operation, run by more than 5,000 volunteers from all sectors of society.

Accountants are making bread while bankers are chopping onions. As this year’s convention draws to a close, preparation for next yearâ€™s begins.

As with every year, more visitors will be expected in 12 months’ time.