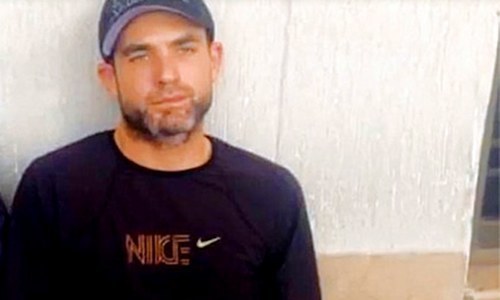 ISLAMABAD: The Federal Investigation Agency (FIA) is in the process of quizzing blacklisted US national Matthew Craig Barrett, who has claimed that he had come back to Pakistan to explore the possibility of permanently moving here.

A case has been registered against Barrett under the Foreigners Act and the Pakistan Customs Act.

Sources told Dawn that Barrett had tried to justify his arrival in Pakistan â€” despite being on a government blacklist â€” saying that he reasoned there were no charges against him after he was issued a visa by the consulate in Houston.

But things may not be as simple as that. Sources privy to the investigation have raised several questions: why would he come to assess the feasibility of moving to Pakistan without his wife, Banosha Khan; and, how did he manage to obtain a four-year multiple-entry visa within 24 hours. 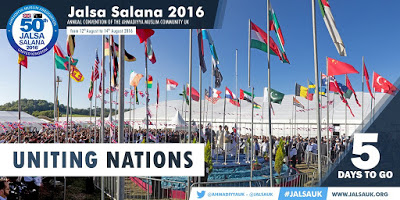 Over 30,000 Muslims are expected to attend a landmark Islamic convention to be held 12-14 August in the British countryside. They will pay tribute to Britain for the freedom it gives its citizens and see delegates pledge loyalty to their nation as a fundamental part of their faith.

The Worldwide Head â€“ or Caliph â€“ of the Ahmadiyya Muslim Community, His Holiness Hazrat Mirza Masroor Ahmad, will lead the three-day convention of more than 30,000 people with a rallying call to members to serve the country they live in and to work for peace at every level of society.

And, all delegates will take a pledge -as they have done every year- reaffirming their loyalty to their country of residence. This yearâ€™s convention â€“ called Jalsa Salana â€“ is special as it marks the 50th anniversary of the spiritual convention.

A tented village, rows upon rows of stalls, fluttering flags, tens of thousands of people and an organised programme of events provide all the hallmarks of a country festival but its focus on faith and fraternity and the sheer scale of the convention sets this apart from all other gatherings.

The Jalsa Salana of the Ahmadiyya Muslim Community is an extraordinary event and it marks over100 years of the community in Britain and tells the story of a community in exile- persecuted in lands where extremists hold sway.

The convention comes at a time when there is growing unrest in the Muslim world and the fear of extremism is escalating. His Holiness Hazrat Mirza Masroor Ahmad said:

â€œWe continue to witness grave injustices being committed against innocent people, be they Muslims, Christians, Jews or people any faith or of no faith. This is most reprehensible and there is no justification for such atrocities. All people who wish to promote peace must stand united against such bloodshed.

â€œFurthermore the world powers must use their influence to engender justice for all. Without justice there can never be peace and unless serious thought and selfless action is taken by governments then the world is slipping rapidly towards an increasing state of conflict. We must turn to God and make every effort to work for unity and to help all those who are suffering. That is the true path to peaceâ€

â€œThe 30,000 plus people from over 90 countries gathering at the convention come in the spirit of fraternity â€“ and to give thanks for the security and freedom they have found in Britain.

â€œMany have fled persecution in other countries and together, they will re-affirm their pledge to follow the true teachings of Islam â€“ that are teachings of peace – and to counter all forms of extremism and intolerance.

â€œWe have much to be grateful for in Britain which has allowed our community to prosper and contribute to British life for more than 100 years. We count ourselves proud to call ourselves British Ahmadi Muslims.â€

The Ahmadiyya Muslims have special reason to be grateful â€“ their enlightened and tolerant thinking has made them bitter enemies of firebrand clerics hell bent on using religion to incite hatred and violence.

But despite severe persecution abroad, Ahmadiyya Muslims are flourishing in Britain and many other parts of the world, so the annual convention will be a chance for them to give thanks for the freedom to worship they have here in the UK.

One of the many exhibitions onsite will highlight the persecution the community faces in countries where extremist Muslim clergy preach hatred, particularly Pakistan where hundreds of Ahmadi Muslims have been murdered.

â€œDespite persecution, the abiding message of our community is Love for All, Hatred for None. And despite the efforts of extremists, our message of peace has prevailed and we continue to counter hatred, terror and prejudice with strength of faith and purpose. When we say Islam means peace-we practice it by example in our everyday lives and through our contribution to the well-being of the nation.

â€œAs the world rallies against the onslaught of extremists, the example of our community demonstrates that peace will always find a way to triumph over adversity.â€ 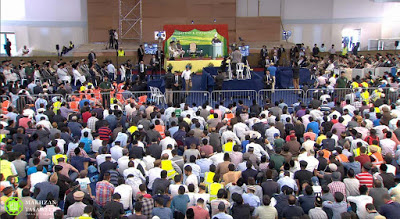 The 3-day Jalsa Salana, which takes place at Hadeeqatul Mahdi in Hampshire, begins on Friday 12 August 2016.

During the inspection, Hazrat Mirza Masroor Ahmad visited the various departments tasked with organising and running the three-day event. His Holiness was briefed on the arrangements as he inspected the site.

Later, His Holiness directly addressed many of the 5,000 volunteer workers and advised them to conduct their duties with diligence and to be regular in prayer. He advised the workers to display the very best manners throughout.

â€œEvery volunteer and worker should display excellent manners and etiquettes at all time. They should ensure that they do not say or do anything that could cause offence or worry to any of the guests.â€

Reminding the volunteers about the importance of prayer, Hazrat Mirza Masroor Ahmad said:

â€œOnly through prayer and the worship of Allah will our efforts and our work be blessed. This is the secret to our success! Without Allahâ€™s Grace and Mercy we cannot achieve anything.â€

Earlier, His Holiness also inspected Jalsa Salana arrangements made at the Baitul Futuh Mosque in London and at the premises of Jamia Ahmadiyya UK in Haslemere.

On Sunday, thousands of Ahmadi Muslims will take a pledge of allegiance, known as the Baiâ€™at, at the hand of the Khalifa (Caliph).

The entire proceedings will be broadcast and live-streamed around the world on MTA International.