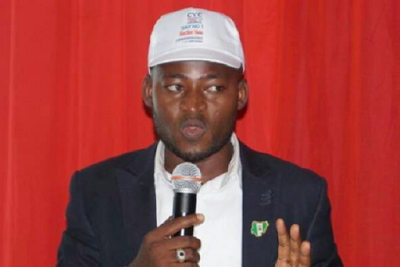 An Ahmadi Muslim youth leader and socialÂ activist Hon. Ishaq Olamilekan Popoola has been honored again with an award as a Peace Ambassador during an event organized by the Christian Youth for Peace & Development Initiative in collaboration with Inter-Religious Peace Initiative.

The event, which was aimed at enhancing the capacity of young leaders on inter-religious and intercultural dialogue techniques and networking, had participants from different religious organizations.

While addressing the press at the end of the event, Hon. Popoola stated that: â€œI belong to a religious community that is known for peace-making around the world. I have had privileges to work for PEACE, in all ramifications, in the past and I am more committed to strengthening this at the moment and in the nearest future. I see my continuous pursuit for peaceful coexistence among people of different backgrounds and multiplicities in ideological beliefs as my humble selfless service to national unity and development. If we all preach PEACE in our utterances, actions and other forms of societal engagements, it is only then a multi-religious society like ours can achieve a sustainable future.â€

Previously, Hon. Popoola also received a Peace Ambassadorial award from the Commonwealth last year. His formal peace award was for his meritorious services on peaceful general elections in Nigeria while the latter was for his contributions in achieving peaceful coexistence among youths of various religious bodies. Hon. Popoola was a formal studentsâ€™ union leader, pioneer Honourable Member of the Nigerian Youth Parliament (NYP), aÂ member of the national executive council of the National Youth Council of Nigeria (NYCN), Committee Secretary at the Commonwealth Youth Council (CYC), among others.