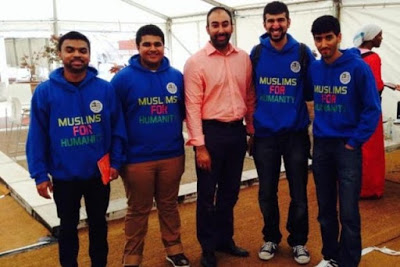 Ahmadiyya Muslim Youth Association spokesman calls for an Islamic state of mind, not territory, to address â€˜crisis of leadership and spiritualityâ€™ in the Muslim world.

Farooq Aftad, a lawyer and human rights activist from south London, has addressed what he describes as the â€˜voidâ€™ between Islamic teachings and its violent and destructive application by groups like Daesh.

He is also the deputy director of the Ahmadiyya Muslim Youth Association, a group who have raised millions for charity, including Barnardoâ€™s, the Royal British Legion Poppy Appeal, and were recognised in parliament last year when Prime Minister David Cameron described their work as â€˜true faith in actionâ€™.

Following the recent terror attacks that have shaken Europe and the Middle East he said: â€œStriking terror into the hearts of ordinary people through violence and the projection of fear is an ugliness that knows no border and is common to people of all faiths and no faith at all.

â€œTerrorism perpetrated by extremists who identify themselves as Muslims has become an ever-present threat to the Muslim world and to the West.

â€œI find strength in the fact that while dozens of misguided people will be making their way to Syria in August, myself and 30,000 other Muslims from 100 countries, will be travelling to the UK to listen to the caliph of peace.â€

The married father-of-four argues that the crisis of leadership allows room for hate preachers on our street corners and that the victims of this crisis are not just minorities and women but the whole Muslim world.

As a legal advisor to the international NGO, Human Rights Committee, he regularly liaises with government bodies on human rights and persecution issues with a particular focus on the persecution of Ahmadi Muslims.

His letter is reproduced in full below:

Striking terror into the hearts of ordinary people through violence and the projection of fear is an ugliness that knows no border and is common to people of all faiths and no faith at all.

Nevertheless, terrorism perpetrated by extremists who identify themselves as Muslims has become an ever-present threat to the Muslim world and to the West.

To tackle this expression of terrorism, the Muslim world must overcome its crisis of leadership and spirituality by building a strong Islamic state of mind and not fickle territorial boundaries.

In its earliest and most basic form, Islamic Sufism referred simply, yet profoundly, to the spiritual path towards God.

It represented a direct expression of the very soul and spirit of the religion.

While Muslims believe that this essence was omnipresent in the generations of the Prophet Muhammad, his Companions, and the two generations that followed, there is also an acceptance that, with time, it faded as proximity to the Prophet widened.

In the eleventh century, quoting an earlier saint of Islam, this reality led the Muslim saint Ali al-Hujwiri to write:

â€œâ€™Today Sufism is a name without a reality, but formerly it was a reality without a nameâ€™ i.e. in the time of the Companions [of the Prophet Muhammad] and the Ancients, may God have mercy on them, this name did not exist, but the reality thereof was in everyone; now the name exists, but not the reality. That is to say, formerly the practice was known and the pretence unknown, but nowadays the pretence is known and the practice unknown.â€

These words were both true to earlier prophetic statements attributed to the Prophet Muhammad and to the subsequent experience of Muslim territories and their people.

Over the centuries Muslims changed the world in very positive and profound ways through science, mathematics, engineering, art, literature and through their great spiritual contributions.

However it is also true that the administration of the religion of Islam became heavily formalised and largely reflective of the political ambitions of various, often despotic, monarchical dynasties and their ruling elites.

Today, however, the Muslim world faces an even greater crisis-one both of spirituality and religious leadership.

While medieval Islam was lavished with sophisticated legal and theological minds, today such expertise is extremely rare to find.

Even then, the custodians of Islam in the contemporary world are often duplicitous in their application of Islam and their actions.

The victims of this crisis are not just minorities and women but the whole Muslim world, shackled by a formality and literalism that has forgotten its medieval reality let alone that of the Prophet Muhammad.

There are exceptions to this but they are becoming few and far between. These voids in the Muslim world create the recruiting ground for groups like Daesh and for hate preachers on our street corners.

Confronted by this dangerous crisis of leadership, what is the majority of the Muslim community to do if it cannot rely on its leadership?

As an Ahmadi Muslim, led by a worldwide Caliph living in London, Hazrat Mirza Masroor Ahmad, my experience has helped me to fill the gaps that some other young Muslims in the world have sadly fallen into and can perhaps add value to this discussion.

Unlike Al-Baghdadi, my Caliph has made it clear that, like the Prophet Muhammad, our ambition as Muslims is not at all related to territorial expansion or to force others to accept the world as I/we see it.

Rather, for my caliph: â€œIslam enshrines the principles of universal religious freedom and freedom of conscience. Faith is, and always will be, a matter of the heart and so there should never be any form of compulsion in religion.

â€œAt a time of worldwide conflict, we should remember the basic principle that it is better for all forms of evil and cruelty to be suppressed and for all forms of goodness and humanity to be endorsed. In this way, evil will not spread far, whilst virtue and peace will spread far and wide and adorn our society.â€

From 12-14 August, I will be going listen to a real worldwide caliph just outside of London, my Caliph, a man of compassion and peace.

And so, at a time of great uncertainty, when the Muslim world faces a crisis of leadership and spirituality, I find strength in the fact that while dozens of misguided people will be making their way to Syria in August, myself and 30,000 other Muslims from 100 countries, more people and nationalities than found in the entire membership of Daesh, will be travelling to the UK to listen to the caliph of peace, all of us in search of an Islamic state of mind.