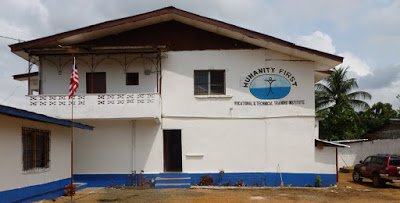 The agreement was signed in front of hundreds of youth on Compound One with several people including Representative Hans Barchue promising to fully support the skills training initiative. Over 350 youths in the district are expected to benefit when the training kicks off early September this year.

Speaking minutes before the signing, Senator Kaipay said the preparation for the partnership was based on discussions held years ago when he worked with the United Methodist Church’s development projects, adding that the vocational training project will be a technical mobile college offering intense six months training in mechanic, carpentry, and general construction, auto electronic and plumbing amongst others.

“The school is a complete academic; it’s not about politics,” Sen. Kaipay clarified to the audience. “It’s an opportunity. Whether you like Hon. Barchue or not, or you like Senator Kaipay or not, it’s going to give you skill. So we don’t want people to politicize it here.”

further warned the youth to avoid politics and focus on building their human resource capacity which will prepare them for the job market, while announcing an initial budget of US$15,000 for tuition.

“To earn an education or skill, you have to work for it. So we want to challenge you as we open this technical training to take advantage,” he said.

For his part, the Principal of the Humanity First Vocational College, Mansoor Ahmad Nasir, described the partnership as a ‘noble task’, while thanking Sen. Kaipay for exerting efforts for the success of the partnership, terming it as ‘highly admirable’.

Meanwhile the Project Director, Sabeel Nasir, said youth will not be the burden of the society if they obtained vocational skills. Nasir promised to extend their vocational training services across the country, having already established vocational schools in other parts of the country, and also motivated youths to exert efforts in order to make the training project successful.

Deputy House Speaker Hans Barchue, the direct representative of the district, encouraged youth to take advantage of the opportunity, stressing that there are Liberians with college degrees that are jobless.

Banks feel cheated when homeowners do this. If you own a home and…
“Skills will be the way forward,” he added; “So I want to encourage you to take advantage.”

Promising to provide financial assistance to some students, he warned: “If I pay for you and you don’t go and complete the course; you’ll give my money back.”

He, meanwhile, advised the trainers to focus on the practical aspect of the training since many youth in the area have limited academic education in order to realize the full objective of the vocational project.