Asian workers forced to scrounge around for food 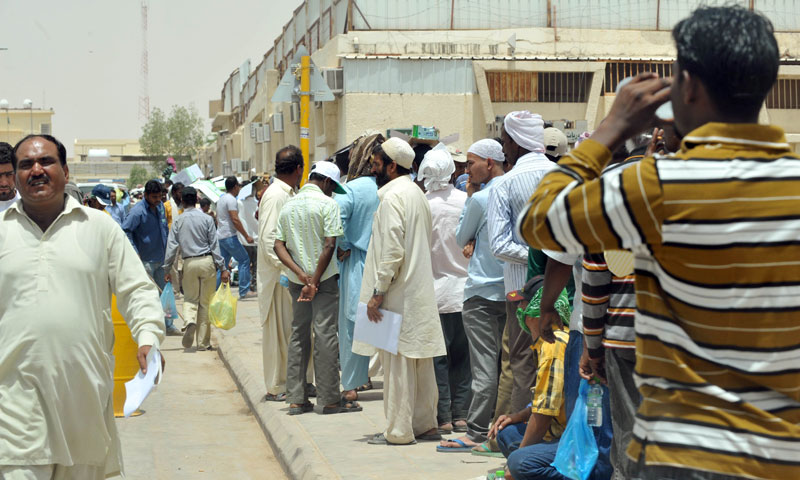 Asian workers forced to scrounge around for food

MANILA: Thousands of jobless Indians, Filipinos and Pakistanis are stranded and destitute in Saudi Arabia after the plunge in oil prices sparked construction layoffs, activists and officials said on Tuesday.

Some Filipinos are forced to beg or sift through garbage to survive after going unpaid for months, said Garry Martinez, chairman of the Migrante Group which works for the millions of Filipino overseas workers worldwide.

â€œSome of them have nothing to eat and have to go through the garbage for food,â€ said Martinez.

India said on Monday it was negotiating with Saudi authorities to repatriate thousands of its own nationals after they lost their jobs, leaving them with no money to return home.

Indian Foreign Minister Sushma Swaraj told parliament in New Delhi she was sending a junior minister to Riyadh after reports that around 10,000 Indian workers had been left to starve.

Indians are among millions of poor Asians working in Gulf states where human rights groups say many suffer exploitation and abuses including non-payment of wages.

In Manila, Migrante coordinator Gilbert Saludo â€” who returned from Saudi Arabia last month after working there for two years â€” said as many as 20,000 Filipinos could be affected.

Saludo said that while Manila had extended financial aid to them so far, it was not clear how long this could last.

The labour problem appeared likely to worsen, he added.

â€œIt will get much worse because so much of the income of Saudi Arabia comes from oil… so their budget for infrastructure and other projects will not be met and more people will be affected,â€ Saludo told AFP.

The Philippine Labour Department said Labour Secretary Silvestre Bello had visited Saudi Arabia last month to address the problem but would not elaborate.

Pakistan said 8,520 of its nationals in Saudi Arabia had not been receiving their salaries for several months.