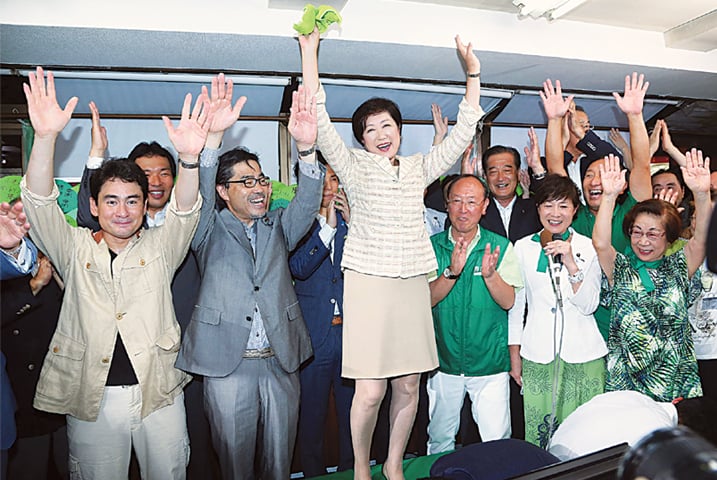 TOKYO: Veteran politician Yuriko Koike was elected on Sunday as Tokyoâ€™s first woman governor, partial results showed, and immediately vowed to get a grip on the megacityâ€™s troubled 2020 Olympic preparations.

The 64-year-old former TV anchorwoman, defence minister and environment minister was some 700,000 votes ahead of her nearest rival with almost two thirds of ballots counted.

Koike claimed victory and addressed supporters in the sprawling metropolis of 13.6 million people shortly after media exit polls declared her the winner at 8pm.

â€œI will lead Tokyo politics in an unprecedented manner, a Tokyo you have never seen,â€ she said in a voice made mildly hoarse after two weeks of campaigning.

The election, contested by a record field of 21 candidates, was called after previous governor Yoichi Masuzoe resigned over a financial scandal involving the lavish use of public funds on hotels and spa trips â€” the second successive Tokyo leader to quit.

Koike largely played down her achievement of becoming the capitalâ€™s first woman governor in a male-dominated society but said she will push female-friendly policies â€œso that both women and men can shine in Tokyoâ€.

A key task will be smoothing the cityâ€™s troubled road to the 2020 Olympics, hit by a series of embarrassing scandals and soaring costs.

Koikeâ€™s four-year term will extend until just after the summer Games start and her performance in the run-up will be closely watched. A key challenge will be getting a grip on swelling costs, seen as possibly double or triple the reported original forecast of 730 billion yen ($7.14 billion). She vowed to tackle the cost issue head on.

â€œI would like to review the basis for the budget, so that I can clarify for the eyes of Tokyo residents how much they would have to pay,â€ Koike said, adding that transparency would be the watchword.

â€œReviewing the Olympic and Paralympic budget will be the litmus test for it.â€