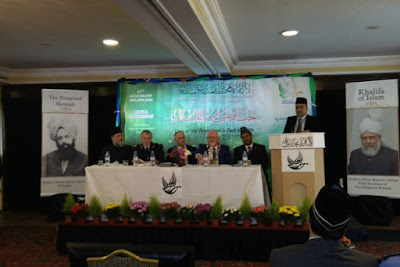 The organisation, which was founded in Ireland in 1992, promotes peace, integration, and a greater understanding of Islam, and believes in the separation of state and religion.

Det Oâ€™Sullivan addressed issues facing the Muslim communities in Ireland, as did other speakers including Minister of State at the Department of Justice David Stanton and the national president of the AMAI, Iman Anwar Malik.

Det Oâ€™Sullivan said members of An Garda SÃ­ochÃ¡na understand that all Muslim sects here in Ireland are peaceful and law-abiding.

â€œIt is of vital importance that An Garda SÃ­ochÃ¡na contain this to ensure that the law-abiding Muslim individuals do not suffer from hate crime or discriminatory profiling in any form brought on as a result of the unlawful actions of the few who declare themselves as representing the communityâ€™s interests,â€ Det Oâ€™Sullivan told the conference.

â€œWe hear constantly about violent extremism and radicalisation and I know these words send a shiver down your spine. Iâ€™m aware of the acute suffering of all Muslims not just in Ireland but worldwide, who are afflicted with fear, due to collateral damage and fall-out from terrorist atrocities supposedly carried out in the name of Islam.â€

AMAI president Iman Malik said: â€œThe wave of recent terror attacks in which hundreds of innocent human beings have been killed, aim to divide communities, spread hatred and cause unrest in the civilised world.

â€œOur community perceives it as a responsibility to pro-actively counter the extremists, by spreading the true and peaceful teaching of Islam.â€

In a separate room, the women of the organisation held their own speeches.

The organisationâ€™s national president for the women, Sajida Aleem, said young people face many diversions, and it is the role of the mothers to educate and stand by their children.