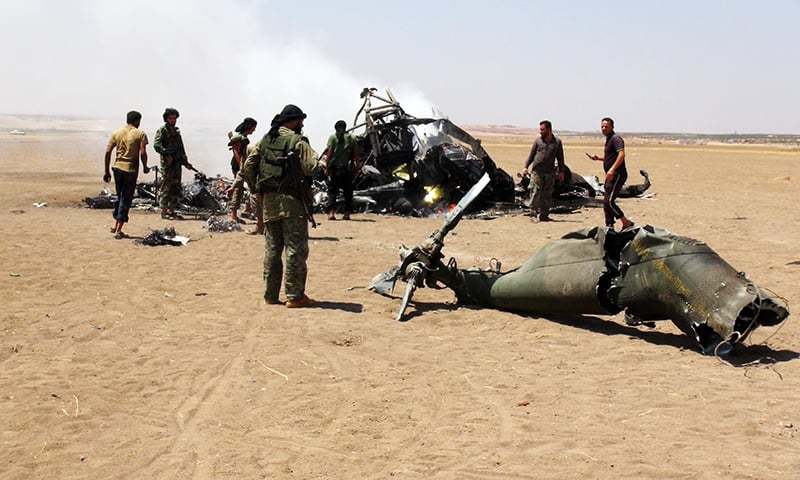 BEIRUT: A Russian military helicopter was shot down over Syria on Monday, killing all five people on board in the single deadliest incident for Moscow since it intervened in the war.

The attack came as militants and their allies battled government forces outside Aleppo in a bid to ease the government’s siege of rebel-held parts of the northern city.

Russia’s defence ministry announced the downing of the helicopter, which it said was carrying three crew and two officers.

â€œA Russian Mi-8 military transport helicopter was shot down from the ground after delivering humanitarian aid to Aleppo,â€ the defence ministry said in a statement quoted by Russian news agencies.

The Kremlin said all five people on board were assumed dead.

â€œAs far as we know from the information we’ve had from the defence ministry, those in the helicopter died, they died heroically, because they were trying to move the aircraft away to minimise victims on the ground,â€ Kremlin spokesman Dmitry Peskov told journalists.

Lieutenant General Sergei Rudskoy called the downing a â€œterrorist actâ€ and said the defence ministry was still trying to confirm the fate of the Russian servicemen â€œthrough all possible channelsâ€.

It was not immediately clear who was responsible.

The incident was the deadliest single attack on Russian forces in Syria since Moscow began its intervention in support of the Syrian government last September.

It brought the total number of members of the Russian forces killed in Syria to 18.

The Syrian Observatory for Human Rights, a Britain-based monitor, said the helicopter had come down along the administrative border between Idlib province in the northwest and neighbouring Aleppo.

Idlib is held almost entirely by a powerful coalition of Islamist and forces including the former Al-Nusra Front, now known as the Fateh al-Sham Front.