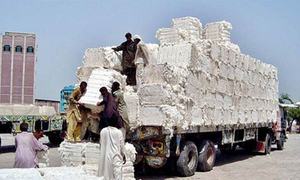 KARACHI: Cotton prices rose on Monday on the back of a surge in demand and continued short supply.

The market generally remained steady as spinners were finding it difficult to meet their near-future demand. The late arrivals of phutti (seed cotton) from Punjab were creating acute shortage of cotton, brokers said.

However, phutti supply from Sindh continued to be normal. Brokers said that since there was no early sowing of cotton in Punjab this season, the arrivals of phutti were also late.

India, which also faces a short crop, is importing huge quantity of cotton from other cotton-producing countries. This may leave little space for countries like Pakistan to import cotton from the world market, brokers said.

According to market reports, Indian importers have placed large orders from Australia, South Africa and West African countries and any imports by Pakistani spinners will have to come from the United States.

Meanwhile, the spinning industry has been asking the government to reduce import duty on cotton because they would not be able to compete in the world market on paying higher duties.

The Karachi Cotton Association raised its spot rates by Rs100, to Rs6,450 per maund.