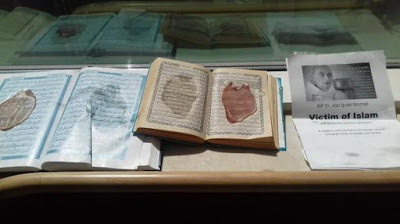 Slices of pork laid inside copies of the holy book, according to photos posted to Facebook by the Islamic Community of Malta.

Vandals also left behind a printout featuring a photo of Father Jacques Hamel, a Christian priest whose throat was slit by Islamic State terrorists in Normandy earlier this week, under the heading ‘Victim of Islam’.
…
Hospital authorities have reported the case to the police.

In a statement this afternoon, the Ahmadiyya Muslim Community Malta categorically condemned the act.