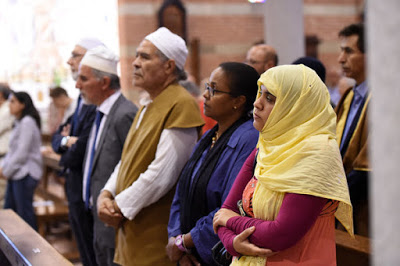 In a gesture of solidarity following the gruesome killing of a French priest, Muslims attended Catholic Mass in churches and cathedrals across France and Italy. A few dozen Muslims gathered at the towering Gothic cathedral in Rouen, near Saint-Etienne-du-Rouvray where the 85-year-old Rev. Jacques Hamel had his throat slit by two teenage Muslim fanatics on Tuesday. “We are very moved by the presence of our Muslim friends and I believe it is a courageous act that they did by coming to us,” Dominique Lebrun, the archbishop of Rouen, said after the service.

Some of the Muslims sat in the front row, across from the altar. Among the parishioners was one of the nuns who was briefly taken hostage at Hamel’s church when he was killed. She joined her fellow Catholics in turning to shake hands or embrace the Muslim churchgoers after the service.

Outside the church, a group of Muslims were applauded when they unfurled a banner: “Love for all. Hate for none.” Churchgoer Jacqueline Prevot said the attendance of Muslims was “a magnificent gesture.” “Look at this whole Muslim community that attended Mass,” she said. “I find this very heartwarming. I am confident. I say to myself that this assassination won’t be lost, that it will maybe relaunch us better than politics can do. Maybe we will react in a better way.”

Many of the Muslims who attended the service in Rouen â€” including those with the banner â€” were Ahmadiyya Muslims, a minority sect that differs from mainstream Islam in that it doesn’t regard Muhammad as the final prophet.

Similar interfaith gatherings were repeated elsewhere in France, as well as in neighboring Italy. At Paris’ iconic Notre Dame cathedral, Dalil Boubakeur, the rector of the Mosque of Paris, said repeatedly that Muslims want to live in peace.

“The situation is serious,” Boubakeur told BFMTV. “Time has come to come together so as not to be divided.” In Italy, the secretary general of the country’s Islamic Confederation, Abdullah Cozzolino, spoke from the altar in the Treasure of St. Gennaro chapel next to Naples’ Duomo cathedral.

Three imams also attended Mass at the St. Maria Church in Rome’s Trastevere neighborhood, donning their traditional dress as they entered the sanctuary and sat down in the front row. Mohammed ben Mohammed, a member of the Union of Islamic Communities in Italy, said he called on the faithful in his sermon Friday “to report anyone who may be intent on damaging society. I am sure that there are those among the faithful who are ready to speak up.”