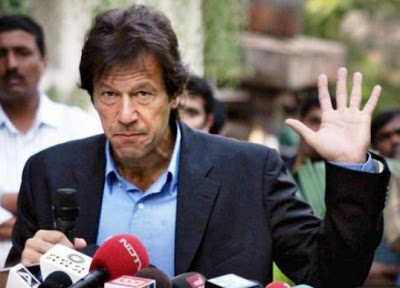 Chairman and founder of Pakistanâ€™s Tehreek-i-Insaaf (PTI) Imran Khan, who is often accused of being a â€˜Taliban sympathiserâ€™, said on Wednesday he considers Taliban to be terrorists, while rubbishing speculation of him supporting extremism and militant groups.

â€œThis is absolute nonsense. Itâ€™s just not true,â€ he said in an interview with Al Jazeera Englishâ€™s current affairs show, UpFront. â€œAll you have to do is look at my statements for the past 10 years.â€ Within this context, Imran was also asked if he considers the Taliban a â€˜terroristâ€™ group. â€œYes they are,â€ he replied. â€œAnyone who kills innocent people are terrorists.â€

Also during the interview, Imran was asked whether he believed the Ahmadiyya community deserved equal rights. â€œAll human beings have equal rights. Anyone whoâ€™s a Pakistani has an equal right. The constitution should protect him, heâ€™s an equal citizen,â€ he said.

During the interview, Imran also responded to questions about the countryâ€™s controversial blasphemy laws. â€œThe laws are not a problem,â€ Khan told host Mehdi Hasan, explaining that the problem was with â€œmilitant groups in Pakistan.â€ When asked if he supported a change to the laws, which carry a death sentence, he responded, â€œExtremism is not going to be fought by laws; extremism has to be fought first by disbanding those groups that are perpetuating this extremism.â€

â€œWhatever you do with the laws, people will be killed,â€ he added. Yet, when asked if he feared for his life by speaking on the subject, the PTI leader conceded: â€œIt is true you have to tread a very thin line. Anything perceived to beâ€¦ Â sacrilegious, yes your life is in dangerâ€¦ It is a very difficult subject living in Pakistan.â€